The DEADMAN is immune to CORONAVIRUS.... Big Event 18 REPORT !!

This is the place to post reports from signing or on the street meets
Forum rules
DO NOT post the location for on the street meets. To keep the spots from being too crowded, we don't allow locations to be posted. You may only post location details about pay meets and organized free signings.
Post Reply
10 posts • Page 1 of 1

The DEADMAN is immune to CORONAVIRUS.... Big Event 18 REPORT !!

I went into Big Event 18 expecting nothing but chaos... between booking The Undertaker, Braun and Bret Hart (who always draws big)... I expected a huge turnout. The only good thing was that I assumed these 3 would be kept far away from each other and from other talent so that the customers would be more spread out in the venue. The bad thing is.. I needed The Undertaker. Hah. I originally wasn’t going to bother since I thought the price was extreme for him, mixed in with taxes and surcharges from the online ordering site... just didn’t want to deal with it. However I obtained 2 graphs as hosts for Xmas.. from a friend and from Michelle.. so at that point I bought another one myself since I still have a few items I needed him on. The other big issue with this show was the last minute cancellations. Weather it was from medical issues or fear of the coronavirus (have you guys heard of this?..LOL). Cancellations included: Alex Riley, Terry Funk, Joy Giovanni,Amy Weber, Chuck Palumbo, Greg Gagne and Psychosis (who just no-showed apparently). At least is saved me some xtra money.

I picked up Dr Satan (rich) and we made our way to the show. We arrived around 8:30 as we wanted a good parking spot (which we got) and soon met up rockersfan (Evan). Soon afterwards they started sending us in groups to redeem our taker items. They offered a fast pass which gets you front of the line access. For the price and when you break down the time you’d be waiting otherwise, seemed like a no brainer. They only offered 100 of them but we were in early enough that plenty we were still available. Once that was we roamed the vendor tables since most guests were downstairs yet. However bright and early was RANDY Hogan, for WCW wrestler. If I didn’t know any better I would have just assumed it was a cosplay fan dressed as Hulk.. but w/e. Got a photo and went about my business. 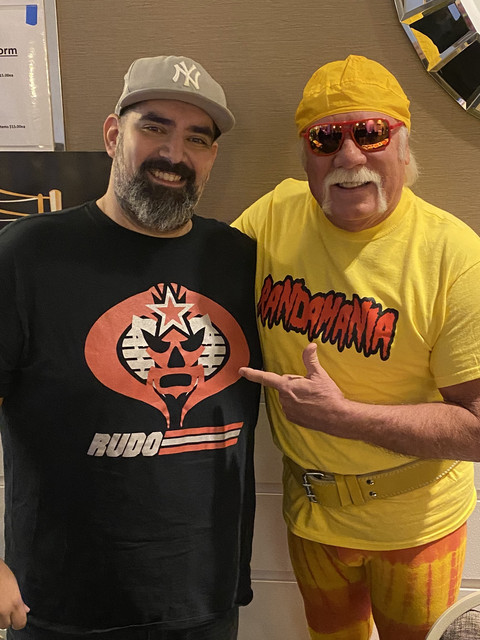 In the main guest room, I immediately spotted Matt Hardy.. he was just getting set up so we have him a moment. I had a feeling he’d be a big draw so getting him out of the way so quickly would be a huge plus. He greeted us all, asked how we wanted our items signed, pen color, etc. You had to buy a combo for Matt however we were allowed to make it 2 autos instead of a photo since I didn’t need another Hardy photo. 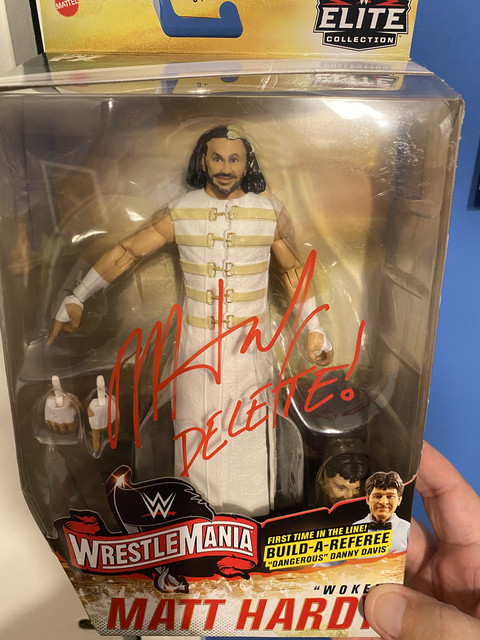 Continued to make my way around and spotted Georgia Smith, daughter of the British Bulldog. She currently works as an interviewer for MLW so family relation or not, she is still a valid photo. She had 2 tables set up of old Davey Boy’s gear and merchandise from over the years.. very cool to see up close. Took a photo with her as well. 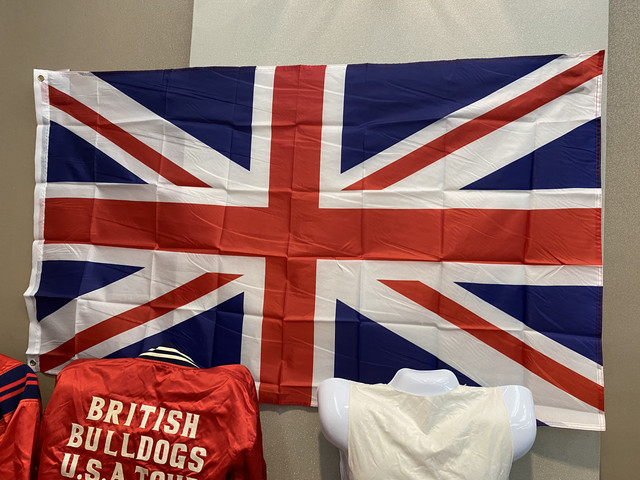 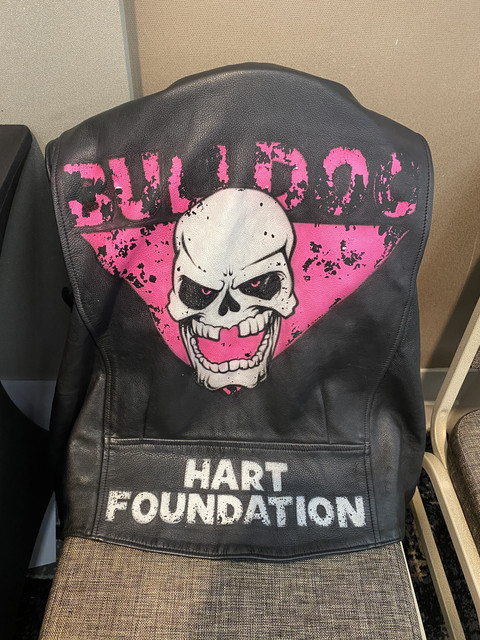 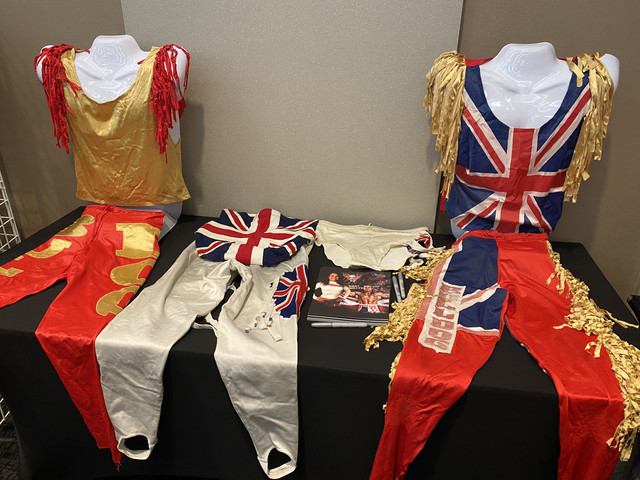 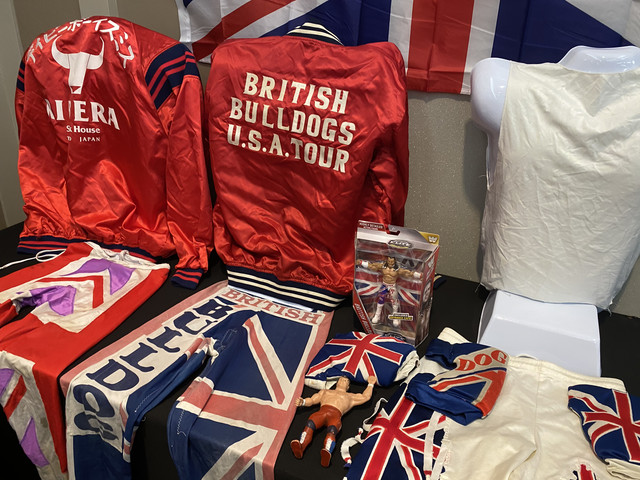 Next was General Adnan.. I met him years ago but it was prior to the release of the 1st WWE Encylcopedia.. He’s in the ency under 2 entries, Gen Adnan, Billy White Wolf, and Chief Billy White Wolf (in a tag team with Chief Jay Strongbow). I got all entries done and took a dual photo with him and Sgt Slaughter as they were both in gimmick. Didn’t need it but was a cool visual... so what the heck. 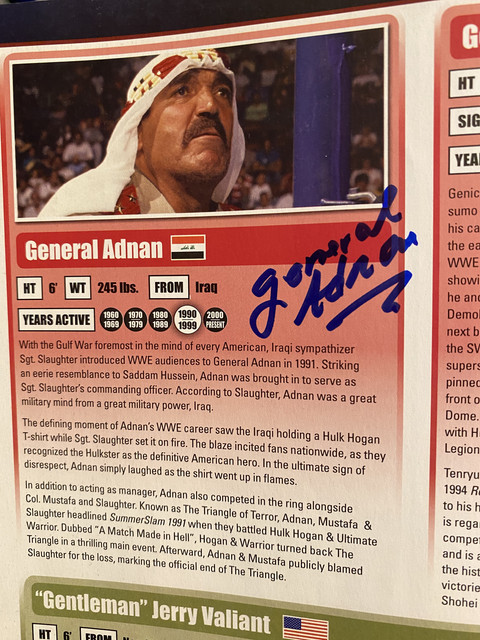 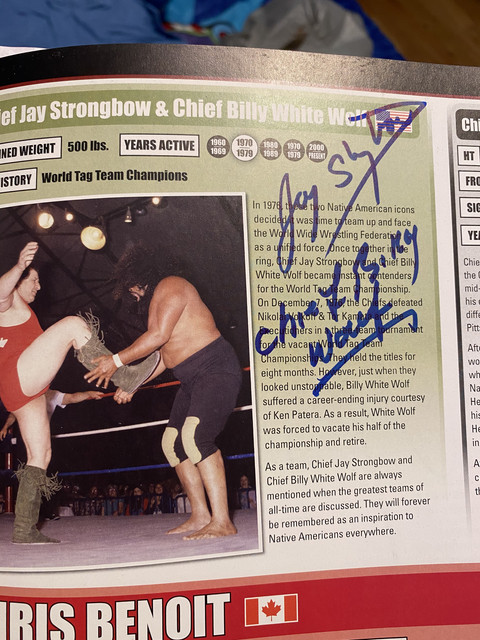 As I was getting Adnan, I spotted Lita walk in and start setting up a few tables over, so dashed on over to avoid a big line for her. No photo needed but had a figure I wanted signed. Lita was especially cool with fans, seemingly not caring about any viruses going around, giving handshakes, offering hugs.. just made you feel comfortable is all. 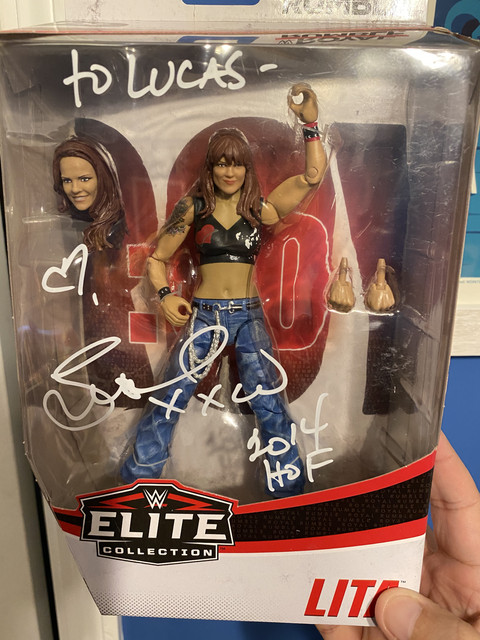 Next was long time indie wrestler Ricky Reyes. I brought me an 8x10 from his time in Lucha Underground (as Cortez Castro). Just needs Chavo to complete it now 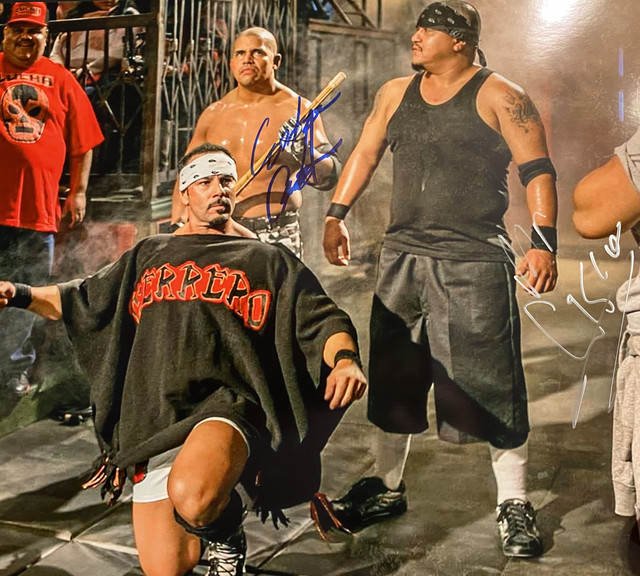 Next was Max Moon...aka Paul Diamond. I was skeptical at first, thinking the gimmick photo was just going to be Diamond wearing a custom mask or something. But the attire looked kinda cool, so I went for it.. 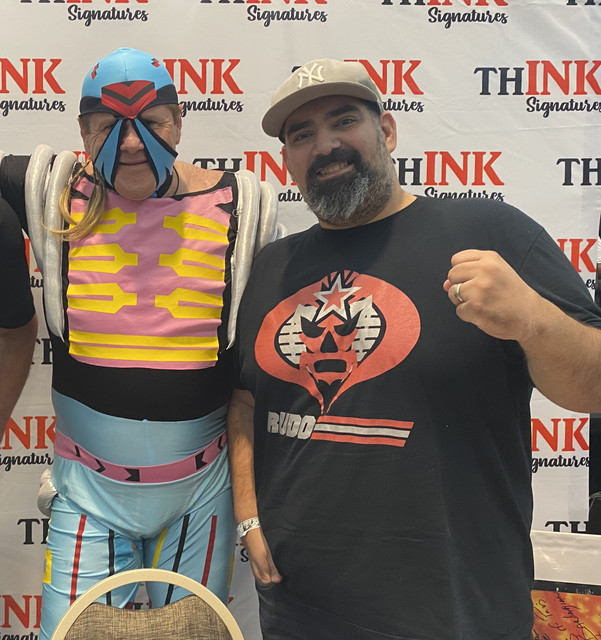 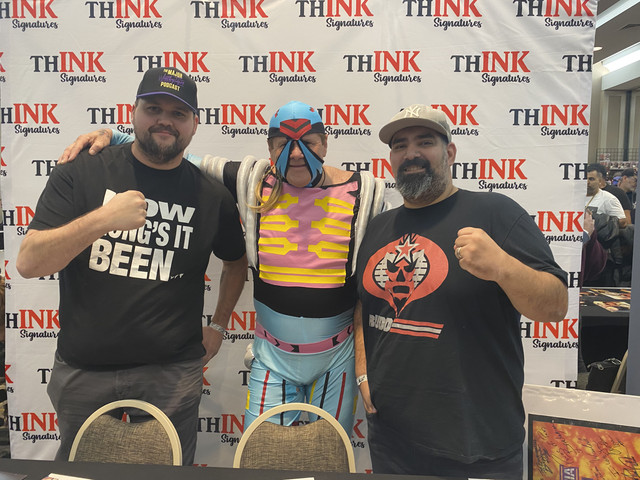 At this point we had a lot of time to kill before the taker auto sessions. I managed to get a new with Debra McMichael and split a photo (thanks jabronijosh) with ROH’s Veda Scott. Veda is someone I always passed on (like Mandy Leon)... but took the ‘you never know’ approach and got her. 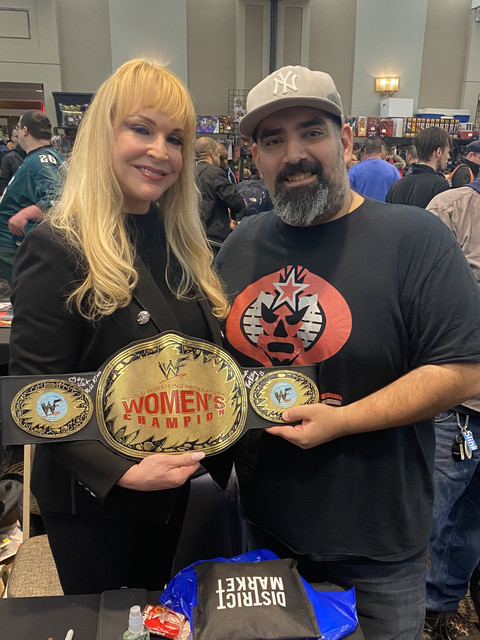 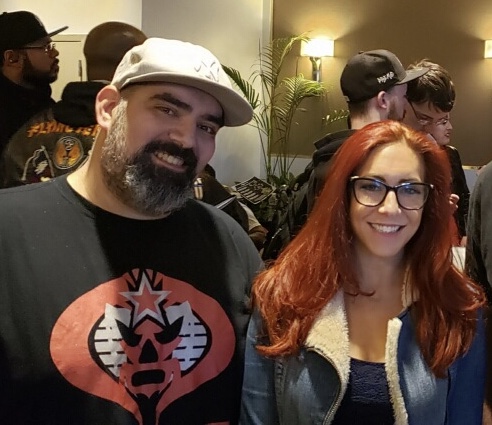 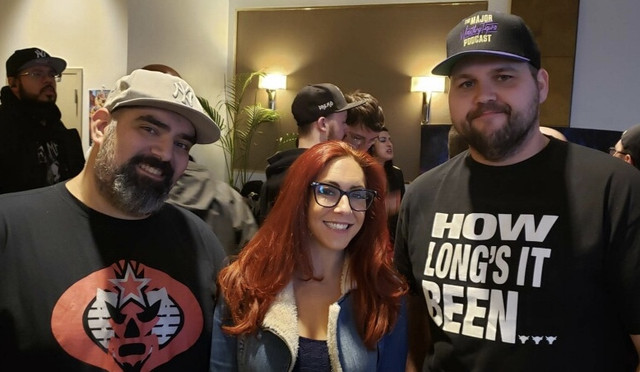 Finally the witching hour was here. I watched for 2 hours as the hallways area was an utter mess with fans waiting for Taker. The promoter came out multiple times to clear the area, making sure only photo opp customers were waiting there.. but people didn’t listen. These are the same people who bitch and moan about how disorganized events are when they are a major cause of the problem. Autographs were supposed to start at 1:30.. but probably didn’t start until about 2, which was understandable given the turnout. The fast passes were actually numbered but no one cared.. so while we were 20/21 .. we were probably more like 40 - 50 back. Oh well. Once we we get into the auditorium, it was a well oiled machine. You snake thru the aisle, get to the stage area, you hand your tickets to one guy, another takes you items and put them on the table, the promoter is there to match up the marker you want for each item, taker greets you and signs away. Someone grabs your items and slide it down for you to pick up. It was quick without feeling rushed. I was afraid that he wouldn’t switch up markers/pens. Well I was partly right.. they had multiple colors to choose from.. so if you went up with say a purple paint pen, they would use their own. I had an item I bought with the specific intention of using a green neon paint pen. Well they didn’t have any.. and the promoter was cool about using my own. My other 2 I wanted red (which I had but they didn’t).. didn’t want to be pushy so just went with one of theirs since they were already nice about the green. Still came out great, so no complaints. Said my thank you and left the room. Pretty flawless considering. Said our goodbyes to everyone and headed back home. 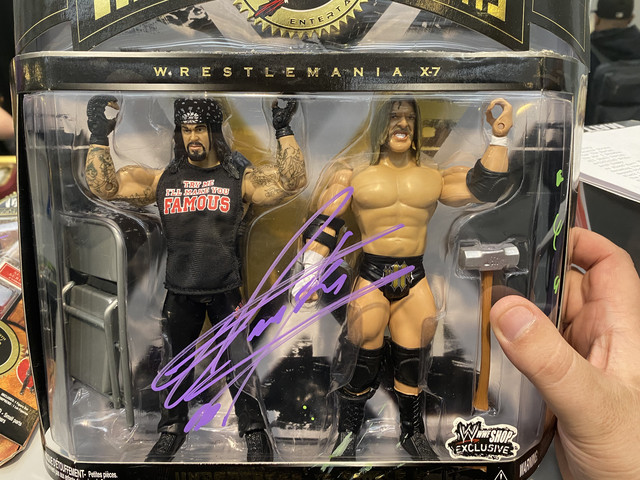 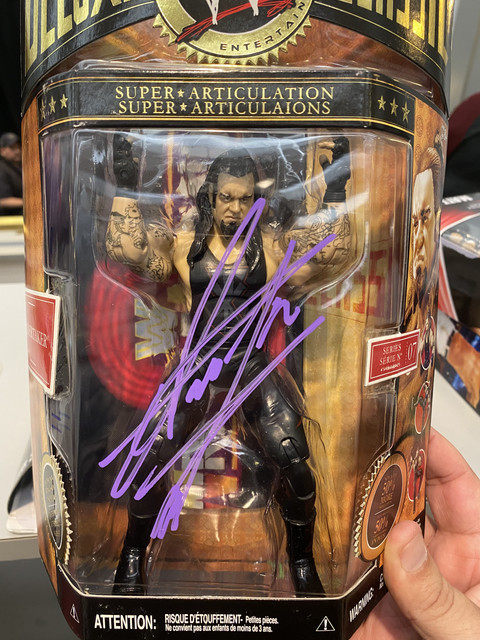 It was probably the longest Big Event I’ve attended.. didn’t get home till 5pm. But it was worth it.. how will they outdo themselves for the next show ? Hard to predict.. but had a fun time today.

Ah also.. special thank you to Josh for bringing me.. a lil’bit of the bubbly !!! 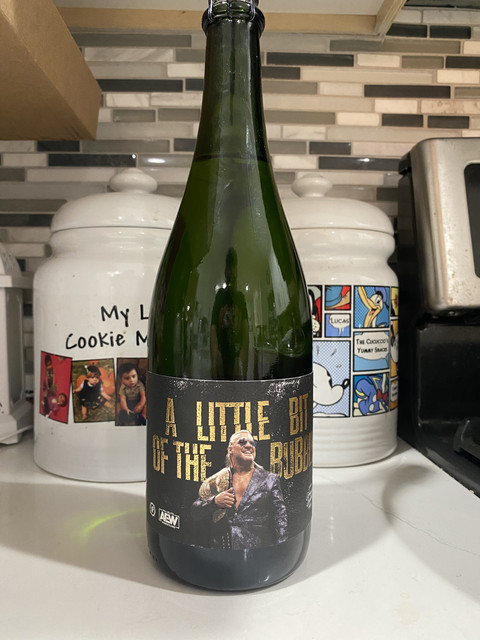 Great stuff, Georgia also appeared in the WWE Hart family Doc, so she was valid before MLW.
Top

Good stuff. Taker autos always look great! I was thinking of going simply to check out the Bulldog gear that Georgia was bringing in, but didnt feel like going just for that knowing the turnout there would have been. Did she charge for photos??
My Photo Ops / Autographs Collection
https://www.flickr.com/photos/luiginyc84/albums
Top

luiginyc84 wrote: ↑
March 8th, 2020, 1:18 pm
Good stuff. Taker autos always look great! I was thinking of going simply to check out the Bulldog gear that Georgia was bringing in, but didnt feel like going just for that knowing the turnout there would have been. Did she charge for photos??


It was $20 and you could take photo holding the vest or even wearing it.. even though I was the first customer I didn’t want to do that.. so paid the $20 for the opp and told me I could take all the pics I wanted of the items
Top