This is the place to post reports from signing or on the street meets
Forum rules
DO NOT post the location for on the street meets. To keep the spots from being too crowded, we don't allow locations to be posted. You may only post location details about pay meets and organized free signings.
Post Reply
6 posts • Page 1 of 1

First report of the new year is for a convention I’ve never been to before. On Saturday I took a train from DC to Richmond, VA for GalaxyCon. I believe they’re a new company that only started doing shows last year, but from what I saw, it seemed to be a decently run show. I was supposed to arrive in Richmond at 9:30, but my train had stopped 5 minutes away from the station. Ended up being delayed for over an hour because there was a freight train that broke down AT the station. I ended up arriving at the convention around 11.

First up was one of the last Smallville main cast members I wanted to meet and that was Erica Durance. I sadly missed her last year when she did a con in Maryland, but that con took place on the weekend of my birthday and I had already booked a flight to not be in Maryland. I am glad that she got booked relatively close so I could make that up. Anywho, I walked up to her line and surprisingly no one was in it! All the other Smallville names had decent sized lines but I wasn’t expecting hers to be empty. Not complaining though because it gave me a little more time to chat with her. She liked the picture I brought for the autograph and talked about all the costumes she liked wearing during her run on the show. I skipped the table ops, since I pre-purchased her pro op, and said my farewell. 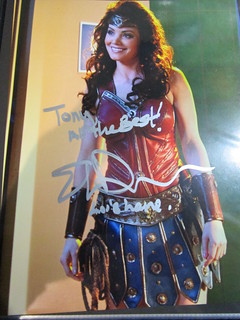 Next line I entered was for Shannon Elizabeth, who also had 0 people waiting. Maybe this train delay had somehow helped me with line management? Don’t know. Before I approached her table, I did see a sign posted stating “Talent is limiting contact with guests” due to the current scare of COVID-19. I honestly expected this, so I limited shaking hands with people, unless they offered. Shannon was nice as I chatted with her about her not aging at all and her appearance in Jay & Silent Bob Reboot. Afterwards, I got a picture and went to what ended up being the highlight of the day. 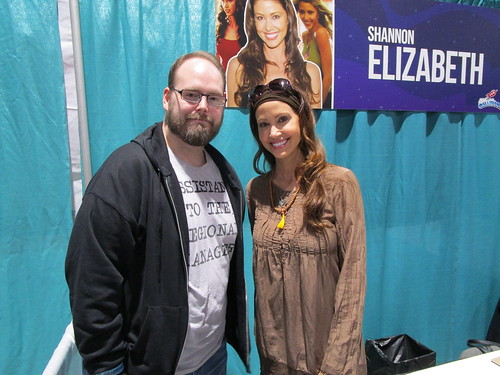 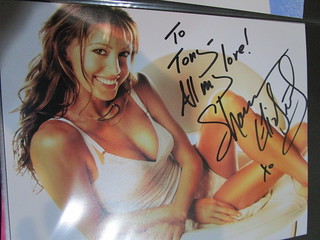 I entered an ACTUAL line for Nadia Hilker. That didn’t surprise me because of her being on The Walking Dead and how popular that show still is. As I was waiting, I couldn’t help but notice how interactive she was with everyone. She was asking everyone questions, encouraging them to ask questions back and not rushing them at all. Once my turn came, she greeted me, asked where I came from for the show and we just talked...mostly about TWD, but she was asking engaging questions and I asked some in return. We chatted for about 10 minutes, which is the longest I’ve ever talked with a guest who HAD a line of people waiting. It was really refreshing to see a guest that was beyond sweet and genuinely wanted to converse with everyone in their line. I took a photo after she wrote a nice note on the autograph and I thanked her for being so damn nice. 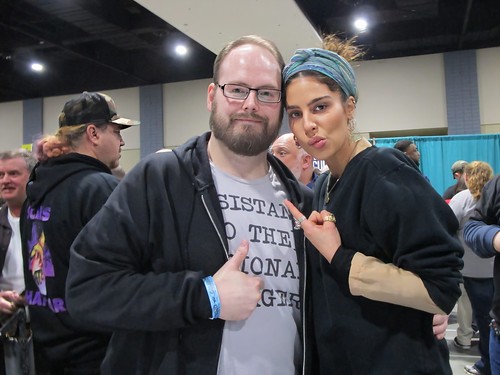 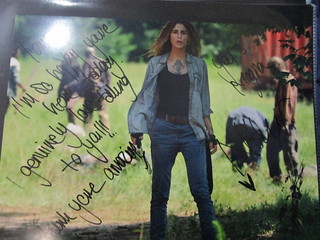 Next up was Armin Shimerman. He’s known for Star Trek, but I of course wanted to meet him for him playing the Principal on Buffy The Vampire Slayer. I chatted briefly as I got a quick combo from him. 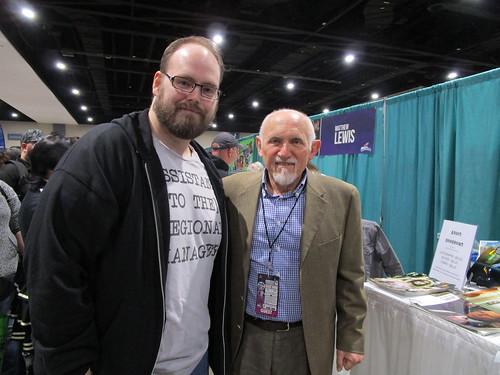 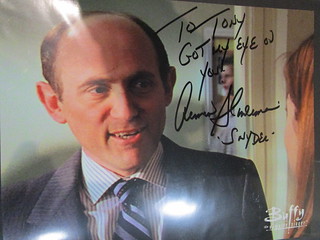 I made my way to the table of Steve Whitmire, who took over puppeteering Kermit The Frog after Jim Henson passed away. He was really nice as I chatted a bit with him about Jim Henson; Jim had lived in the city I grew up in and there’s a monument of him and Kermit at the University of Maryland, which was unveiled when I was going to college there. Also talked about a new series he’s doing on YouTube and ended with getting a photo with him and Kermit, which was free with purchase of the autograph. 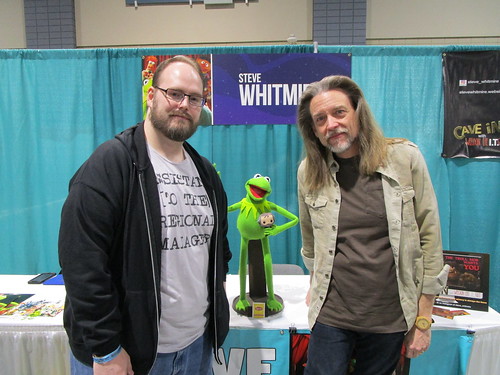 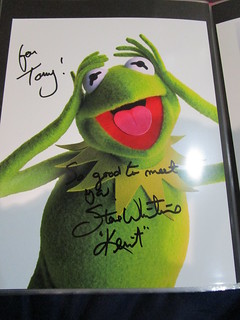 Last table I went to was Flash Gordon himself, Sam J. Jones. There was supposed to be a big reunion during the 40th anniversary of the movie, but during the week of the con, 2 had to cancel. Sam was mentioning how Brian Blessed canceled because of a family emergency and Ornella Muti canceled because Milan was on lockdown due to the virus outbreak and she couldn’t travel. I got a combo from him and since he didn’t have a volunteer at his table, I handed my camera to the next person in line to take a picture. Sam quipped that I should show the guy how to use the “fancy gadget” which seemed odd to me since it’s a Canon...regardless the photo came out nice and I headed off the the pro photo ops area. 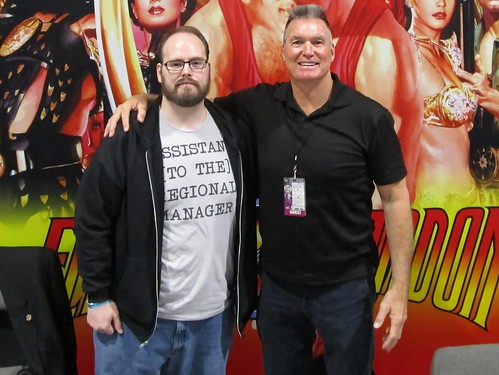 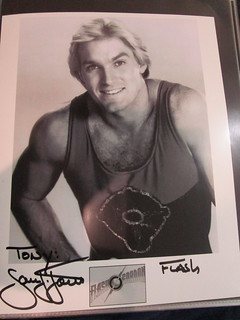 I had two photo ops at the same time. The one that started first was the Clerks duo of Jeff Anderson & Brian O’Halloran. They both shook my hand and we took a good photo. 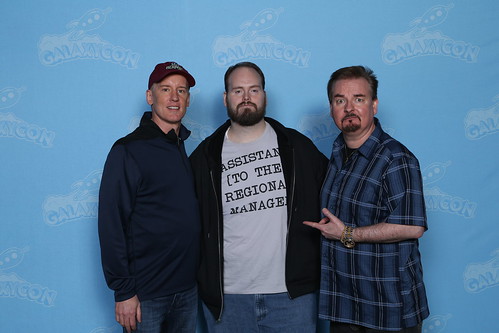 The other photo op was with Erica Durance, who remembered me from earlier. We took the photo and I was done for the day. 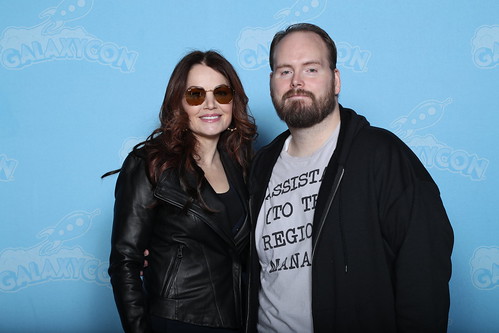 Before I left, I met up with Joresky and chatted for a bit as I had a decent wait before my train ride home...which had an even worse delay than getting to Richmond.

In summary, I did enjoy my time at the show, even with the crappy travel delays, I’m glad I got to knock out my first convention of the year. My next one is at the end of this month so until then, I hope you all enjoy the report!
Top

WTF Amtrak! I guess their service south of DC is as bad as the highways are to drive through VA. Funny, when Shannon had that awful reality show with her then-husband Joe, she was a complete nutjob. She feared some type of chemical weapon, and bought gasmasks for them and their 8-10 dogs in the house! I have read good things about Galaxy Con, and while they'll probably remain mostly in the South, wouldn't mind seeing them in the NE.
The Paunch Stevenson Show pop culture podcast : http://www.paunchstevenson.com
Top

Great photos and autos!! and awesome seeing you at the convention
Top

It sounds like it was just crap luck on my end. Freight train broke down at the station going there and coming back, my train was delayed for a tree falling on the tracks! At least this time I remembered to take the train from DC and not the station closest to me. Apparently when the trains travel anywhere south from DC, Amtrak switches the engines from an electric to a steam one. Takes them about an hour to do that.


Funny, when Shannon had that awful reality show with her then-husband Joe, she was a complete nutjob. She feared some type of chemical weapon, and bought gasmasks for them and their 8-10 dogs in the house! I have read good things about Galaxy Con, and while they'll probably remain mostly in the South, wouldn't mind seeing them in the NE.

I can't believe I forgot about that show! Totally makes sense now!

Thanks, dude! Great seeing you again as well!
Top