This is the place to post reports from signing or on the street meets
Forum rules
DO NOT post the location for on the street meets. To keep the spots from being too crowded, we don't allow locations to be posted. You may only post location details about pay meets and organized free signings.
Post Reply
12 posts • Page 1 of 1

Well here we are again. Chicago, IL where I went to my very first convention and 6 years later, I finally returned. This time for ACE Midwest, which was a really stacked lineup for me and I was lucky to get what I could considering how fast some of the guests tickets sold out.

I arrived early to Chicago on Friday and checked into my hotel since the floor wasn’t opening until 3pm. Before I headed over, I met up with my friend Dave (aka Asian Dave). Once we made it over to the convention center, we waited about ½ hour to get through the VIP check in. After that, went through the first security checkpoint...and I say first because ACE shows have a second security checkpoint to the entrance of the autograph area. A bit overkill, considering they wanted people to leave the area then re-enter when it was time for your next op or autograph. I didn’t follow that of course and just stayed in the area for both days.

Anywho, my first scheduled photo was with Tessa Thompson. She was incredibly nice to everyone, hugging people, doing poses and seemed to be having fun. She liked that I had my sunglasses on, nodding to her MIB role and the picture came out nice. 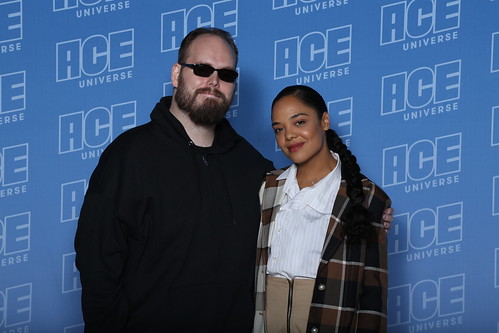 The only other thing I had left for Friday was an autograph and photo op with Gwendoline Christie. First up was the autograph. Their autograph area was essentially all closed off with curtains so no one could see in the rooms. They also would only allow 5 people in the room at a time. Weird but apparently the new standard for ACE shows. So my turn came and I had Gwendoline sign my Star Wars TFA mini poster, which was signed already by Daisy, Boyega & Joonas. Soon followed was the photo ops and Gwendoline was nice during the photo op and we took a good pic. 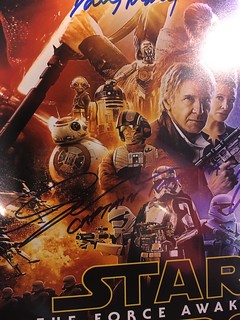 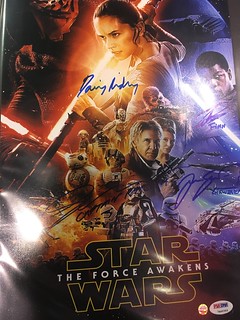 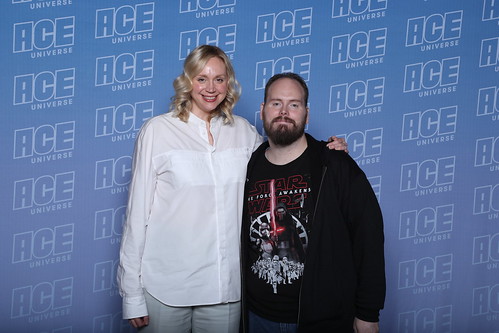 As I was leaving, Dave reminded me that Josh Herdman from Harry Potter and now a MMA fighter was doing free photos. I went to his booth and there was a Hogwarts Express backdrop up for the photo. He was pretty cool and with that, day 1 was complete. 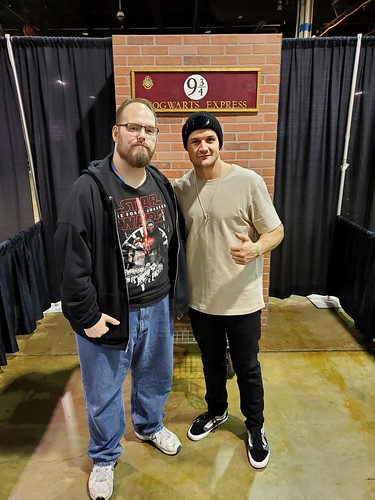 Before Day 2 began, Dave and I met up with Joresky who flew in for the day. They all got some breakfast, while I walked to the con since my day started earlier than theirs.

First up was a dual photo op with Jake Gyllenhaal & Tom Holland. They both greeted me, whilst having a convo with each other, took a decent pic and I went to my next line. 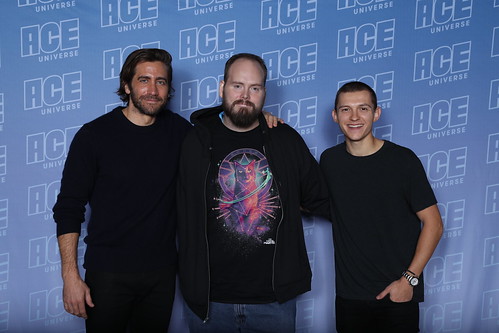 Next was what initially got me there to begin with...their first guest announcement of Brie Larson! While waiting in line, a photo ops employee was stating that you could only pose with your arm on her shoulder and nothing lower...a rumor had spread that someone actually grabbed her ass and that’s why they were stating that, but I can’t confirm if it was true or not. Regardless, she was incredibly sweet, complimented my shirt and we took a great photo! 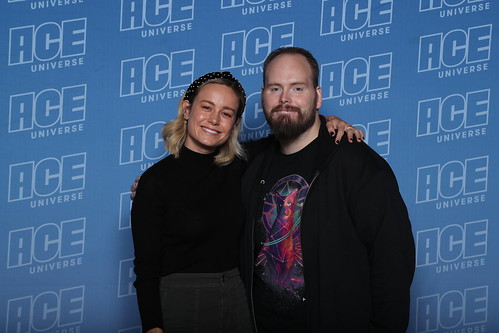 I had a nice little rest period because my next photo op was a good hour and a half away. That photo op was with my other big want from Game Of Thrones, Kit Harington. Kit was pleasant, shook hands and took the pic and I got to scratch another name off of my most wanted list. 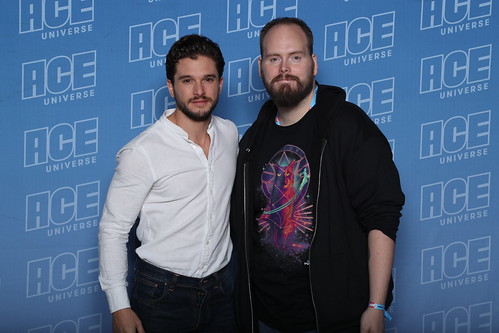 My first autograph session of the day was with Brie Larson. As per usual, here’s where the schedules started to run behind. For photos and autographs that seemingly sold out in minutes, it appears that they still oversold anyway. It was a good hour before I got into the room. Brie though was still amazing, asking your name and how you were. Call it paid nice if you want, I'm just glad it was a great experience. As I had her sign my Captain Marvel mini poster, I congratulated her on her recent Variety and People Magazine acknowledgements for being influential and she was thankful. After this, I headed towards my final photo op. 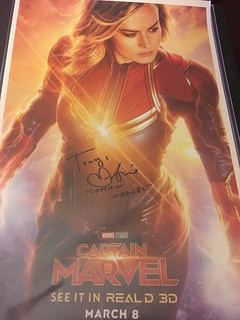 This photo op was for Taron Egerton and I met back up with Dave & Joresky for this one. He didn’t show up on time and mine & Dave’s final autograph session was going on, so we went back and forth to figure out which one would move first. Joresky kept us posted to let us know that Taron’s line finally started to move, so we went back and re-joined him for the photo. Dave went first and had some pretty damn good Elton John style sunglasses to use for the photo, so I asked if I could use them for mine too. Taron was fantastic for wearing a pair, being extremely friendly and funny with it. I know most know him from Rocketman or Kingsman, but after the photo I told him how much I loved Eddie The Eagle and said he was honored to hear it. After retrieving the photo, Dave and I both agreed the glasses made the photo and honestly it is now one of my top favorites based on the experience alone. 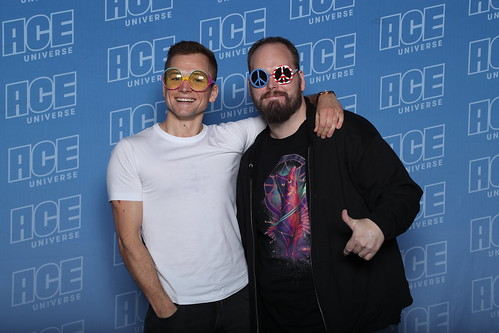 Last up was the autograph session for Tom Holland. I helped Dave out by getting him two autograph tickets, one for him and one for his friend, meanwhile I had 2 for myself. Once we got in the room, Tom seemingly was just in a signing zone and talking to his younger brother who was present. I did manage to get a hello from him, but that was pretty much it. Understandable since he was the most booked person there and really looked like it was wearing him down. I had him sign a Far From Home mini poster and an 8x10 from his table. 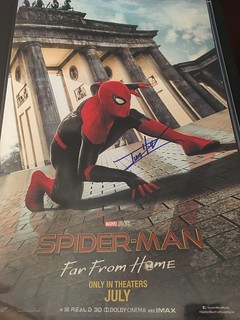 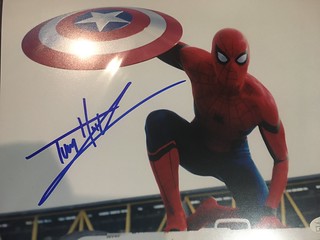 With those finished, that was the end of my day and the end of the show for me. Even though there were some delays, I’m glad I got the chance to go to this. For the past month I’ve been pretty ill, seeing the doctor and specialist multiple times...even with all that, it wasn’t going to keep me from going to this since I had invested a lot into it beforehand. Thankfully I held up okay and got everything I wanted. I’m also glad I got to see Dave & Joresky again. This concludes my con year…I don’t see myself doing another show anytime soon since I have other things I need to take care of. So until then, take care and I hope you all enjoy the report.
Top

All the photos look great!
Top

Wow... what a great guest list.. must of been a fortune.
Top

Great report at what might be the most (currently hot) star-studded convention I've seen yet. The glasses for Taron were a great idea, and thanks for sticking around to make the report!

2nd PS: Dave had some pretty funny/cool photos himself from the con, IF he ever posts a report!
The Paunch Stevenson Show pop culture podcast : http://www.paunchstevenson.com
Top

I love all of your photo ops and the autographs came out great. This report captures the true spirit of this hobby, imo.
Feel free to visit my blog concerning wrestling conventions, signings, and meet & greets!
https://squaredcirclecons.com/
Top


Greg2600 wrote: ↑
October 14th, 2019, 2:21 pm
Great report at what might be the most (currently hot) star-studded convention I've seen yet. The glasses for Taron were a great idea, and thanks for sticking around to make the report!

2nd PS: Dave had some pretty funny/cool photos himself from the con, IF he ever posts a report!

Thanks, Greg! Honestly don't know if I'm getting better because the antibiotics suck, but hopefully so. And I agree Dave had some great pics as well!

I really appreciate that! I know my reports are few and far between but I do like sharing the details of each meet

Man this con had an amazing lineup and your stuff turned out great!!
My collection:
https://www.flickr.com/photos/woodmo/albums
Top

Awesome report Tony!! Had a great time hanging out with you, Dave and Francesco at the show! It was definitely worth the trip for all of us
Top

Always my favorite reports to read. Glad you got another GOT name for your collection.
2017 Most Unique Photo Winner