This is the place to post reports from signing or on the street meets
Forum rules
DO NOT post the location for on the street meets. To keep the spots from being too crowded, we don't allow locations to be posted. You may only post location details about pay meets and organized free signings.
Post Reply
8 posts • Page 1 of 1

On the Mean Streets of New York, it was raining, at times pretty heavy, then became a steady mist. A master informed me of an event with Martin Scorsese, who I’ve lost count on fails with a photo op. However, most of the hobby were busy on huge messes involving the new Bill Murray/Adam Driver zombie movie premiere (few did it) and the new Shaft movie, where nobody stopped. I see almost no one valid go in, and then finally here’s Marty’s car. He gets out, I ask, and he says “no no sorry, maybe a bit later.” Great, yet another failure. Meanwhile a couple people I know were waiting farther uptown for accomplished young actress Shailene Woodley, someone I've missed a bunch before. They of course ignored my advice on where to stand, and were on the wrong side of the building. I was literally running down the street as her car pulled up and she zoomed inside. Terrific, second fail of the night. Well, I guess the combo Goddess of Thunder was looking out for me this night. We go to Whole Foods for something to eat and return. Shailene exits with her BF, and to our delight, actually stops for the 5 of us there. I was shocked that only 1 person from inside bothered to wait. My two mates went home, and I returned to the Marty spot, meeting the aforementioned master. I saw Marty’s car in the back, so I stood there. After an eternity, he and his family finally came out. I asked him again, and this time he sprinted to me and did the selfie!! Finally! I rejoined my friend in front, where we got actor Michael Murphy. We didn’t know Ric Ocasek was inside though (oops), and we left. I then dropped the master off at the Murray after party, and I went home.

Few days later I was forced to try a morning spot for Julia Stiles from Bourne Identity and 10 Things I Hate About You, as she was doing little else. I got there and heard she went in real early and said she’d do it leaving. True to her word, she was very nice. While there I finally bothered to ask Sutton Foster for a selfie (still haven’t seen a thing she’s done). The cast of the old MTV crud The Hills was there, but since I consider none of these people to be talents, I ignored them all. Waited at a spot for Jimmy Fallon, but he must have gone in already. My last play of the day was for former Castle star Stana Katic. I have heard mixed things on her, but to be honest, despite acting like she’s being rushed everywhere, I found her to be funny and quite friendly. I missed out on her a few years ago at an easy spot but I didn't go because at the time I was told she was bad. Anyhow, I had an 8x10 sitting around from a few years ago, and she signed that along with the selfie. 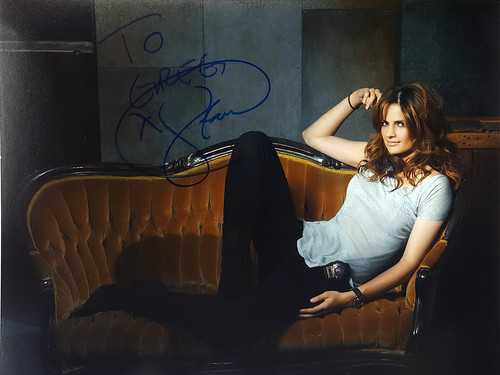 I wasn’t intending on doing much else in the city, certainly not early, but I saw that Kevin Costner, a very very long time want was going to be doing some press. I got to a spot, where he blanked going in but seemed to indicate he would do it leaving. There were maybe 8 of us, and he did one each. I probably could have gotten my 8x10 signed, but I wanted the photo above all else. In a bit of miscommunication, I pulled it back because it seemed like he agreed to a selfie instead. A few of us went to check another spot on foot out, and in the process walked by the studio for WFAN, where the iconic “Sports Pope” Mike Francesa was meandering in, so I got the photo. A tad later, I made a subsequent low-key stop for Bianca Lawson, who starred in Saved By The Bell: The New Class, and appeared once on Buffy as Kendra the Vampire Slayer. She was super nice, and I lucked out that Robin Givens from Head of the Class was also there.

There was a charity event for David Cone, former NY Yankee, that I expected to see many of his old teammates at. I was right. Many of these former players I’ve met in the 90’s to get their autographs but not photos. Unfortunately many didn’t stop on the way in. The only one I didn’t have before was David Wells. On the way out I got Mickey Rivers, Roy White, and Chris Chambliss from the 70s teams. My main get was Paul O’Neill, a 90s favorite of mine, as well as Jeff Nelson. Mariano Rivera, Bernie Williams, Joe Torre, Willie Randolph, and musical guest Paul Simon all blanked. Bruce Willis passed by a couple times on foot, but denied any attempts.

I made a brief stop for long time Law & Order actress Elizabeth Rohm, who also played the love interest for Angel on the first few seasons of that show. Spotted her and she was very nice. While there I waited a bit, and finally got a photo with Jimmy Fallon. Later on I met up with my fellow racing fan Josh to get some autographs from Mario Andretti, because why not? I had him sign my 2019 Indy 500 program which I bought at the Speedway. It honors the 50th anniversary of Mario’s victory in 1969. I also had him sign an old trading card they gave out at my local K-Mart like 30 years ago.

After that I met up in Brooklyn with friends to try for Steven Spielberg for the 77th time, and yet again, failed. His car was pulled back quite a distance from us, and he ignored our calls. I figured it was too late to try anything else so I started driving home (much easier drive than into BK). In the meantime, I heard from Josh that Daisy Ridley garaged her appearance and nobody got her. He reminded me of a spot with Mad About You star Helen Hunt, but she normally won’t take photos. However, he said she HAD done them the night before! Again, with traffic, there was no chance I could make it in time. I decided to pass by anyway, and to my luck, the cast wound up leaving 45 minutes later than I expected. Helen hit both sides of the small rail setup, and I got the combo. I then dropped Josh off at another spot and went home. 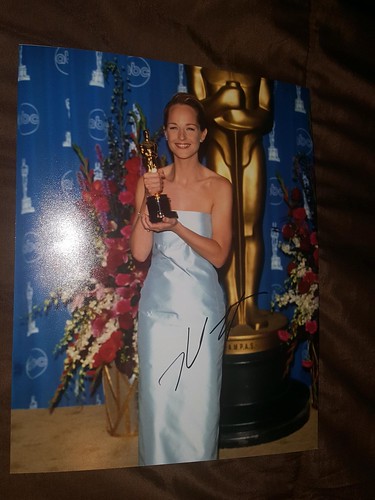