This is the place to post reports from signing or on the street meets
Forum rules
DO NOT post the location for on the street meets. To keep the spots from being too crowded, we don't allow locations to be posted. You may only post location details about pay meets and organized free signings.
Post Reply
10 posts • Page 1 of 1

The end of January means two things: the first month of the new year is in the books and the annual MAB Pinstripe Parade. 2019 marked my fourth straight Pinstripe Parade/Bronx Baseball Bonanza and it went pretty much as expected. Let’s get to it.

My parents and I arrived at the Hilton Hasbrouck Heights hotel just after 9:30 AM -- a little earlier than I expected with my first photo op scheduled for 10:30 AM (more on that later). The layout of the show was just a bit different from last year as they opened up a smaller room (across from the main vendor room and adjacent to the photo op room) that had additional tables for signing, a JSA station (they complained big time last year about being placed in the Photo Op hallway), a vendor selling merchandise protectors, and a few row of seats for Q&A sessions held throughout both days.

I picked up my tickets and will call and roamed around the main vendor room for a bit. 10:30 AM comes and I head out to the corridor and wait outside the Photo Op room for Michael King...but there’s no sign of him. It’s now 11 AM and Don Mattingly’s big photo op line starts to form outside the photo op room. Mattingly’s photo op session comes and goes and there’s still no sign of King. Right around this time, I got to meet AJLe and he couldn't have been nicer! It's always great meeting board members. I also saw Greg and we chatted for a bit. 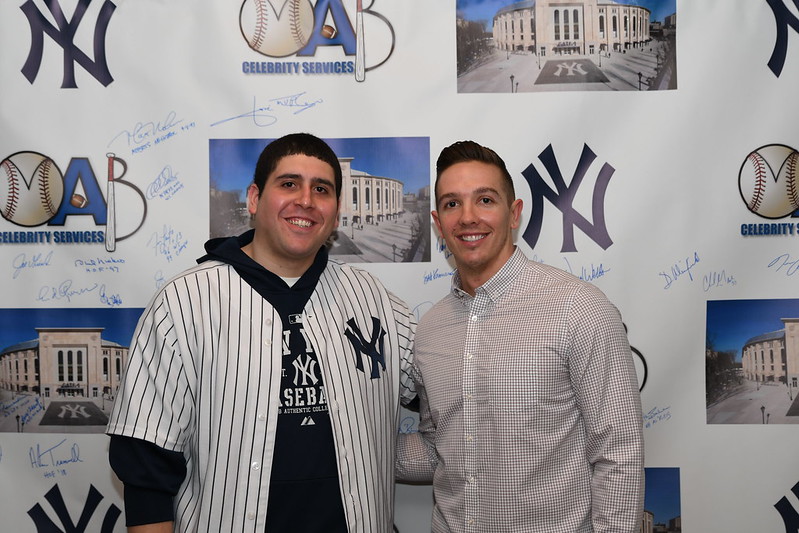 It’s now 11:30 AM and I spot Joe Girardi and Chad Green headed towards the photo op room. Funny story: a man patted Green on the back and told him, “We both know that man (points to Girardi) was the better manager. I know you can’t say it but we both know it’s true!” Anyways, Green was really nice (and way taller than I expected) and I wished him luck on this upcoming season. Green is apart of the latest Yankees super bullpen and I’m excited to see them in action.

It’s now 12:00 PM and there’s no sign of Michael King. I asked a couple of MAB employees if he had cancelled but they told me he was on his way. Apparently, his parents picked him up from the airport but no one seemed to know where they actually were. Sounds like some sort of miscommunication. Also annoying: Joba Chamberlain was supposed to do photos first but ended up signing first, so I had to wait until he was finished. Blah. 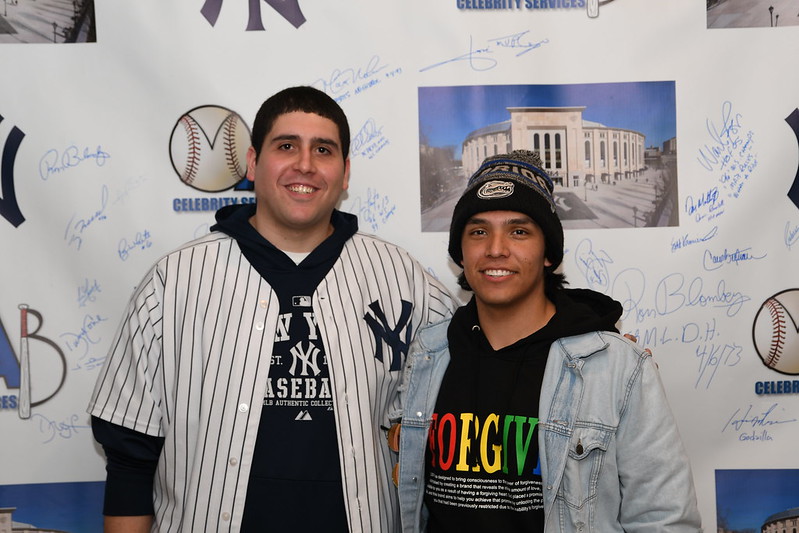 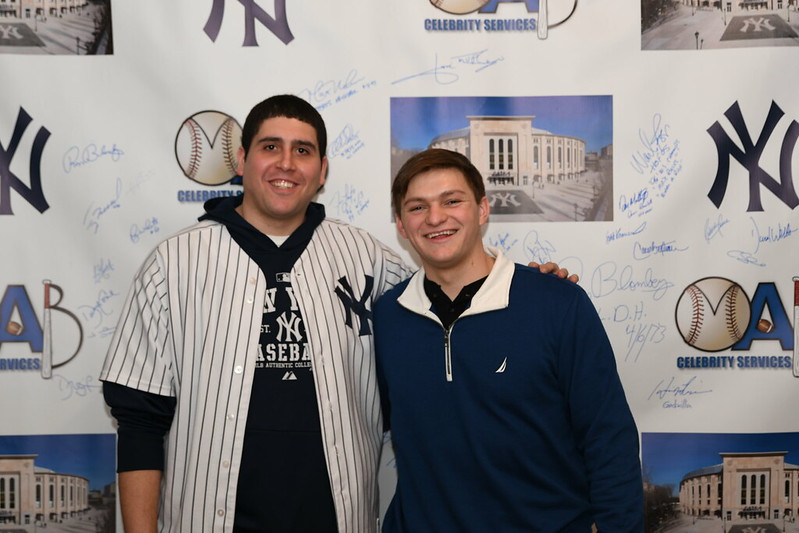 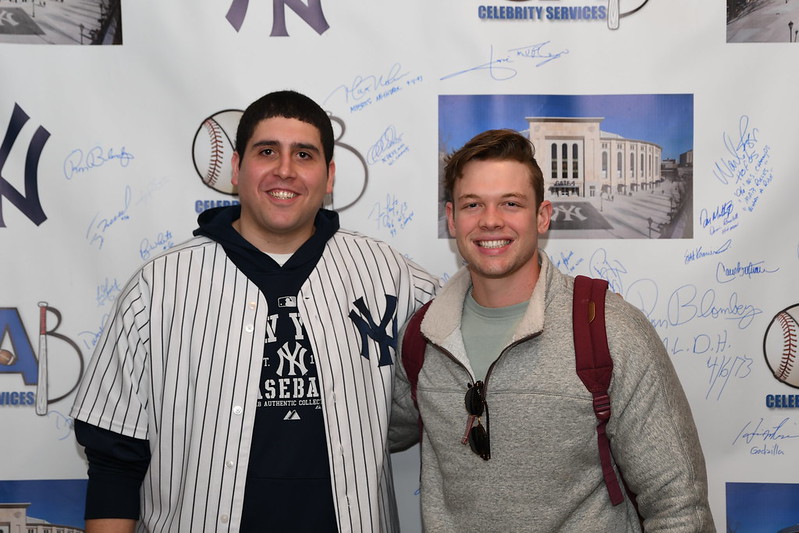 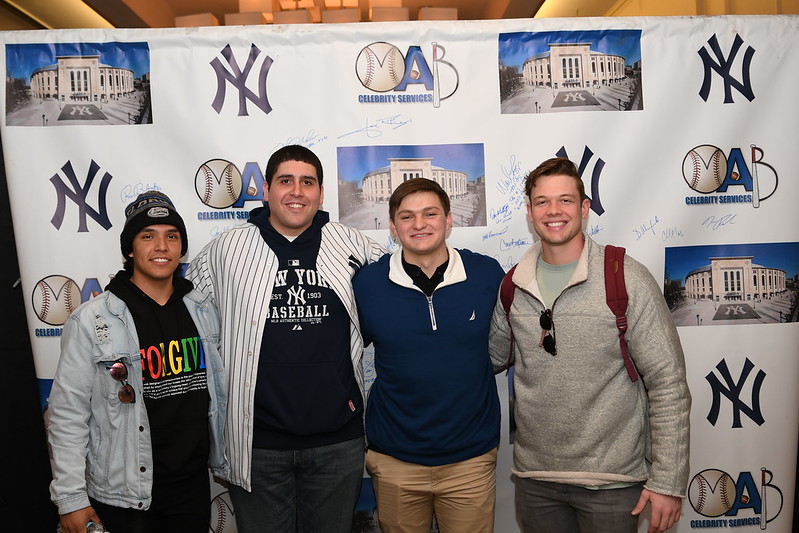 12:30ish rolls around and I spot the three 2018 Yankees draft picks headed into the photo op room. I had only pre-ordered Anthony Siegler (their 1st round pick) but ended up purchasing photo ops for Josh Breaux and Ryder Green (which were only $10!). Their handler told me I could get an individual shot with each pick and then a group photo, so I jumped all over that! All 3 were really nice kids. It’ll be awhile until they reach the MLB (if ever) but, hey, ya never know…

They then made an announcement that Michael King had been bumped to 1:30 PM. Hooray. 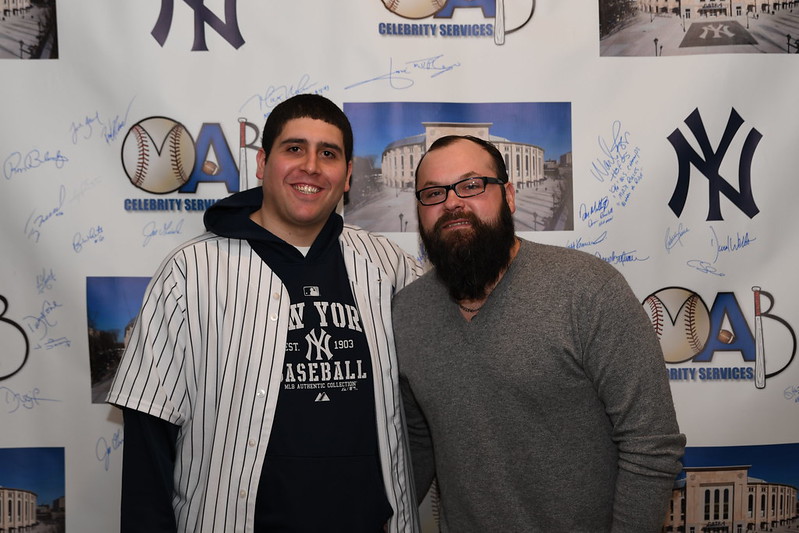 Joba Chamberlain is finally done signing and does photos. Cool moment: former teammate (and bullpen mate) Damaso Marte came into the photo op room and the two of them were chatting and catching up. I pre-ordered ops for both of them and both were very nice. 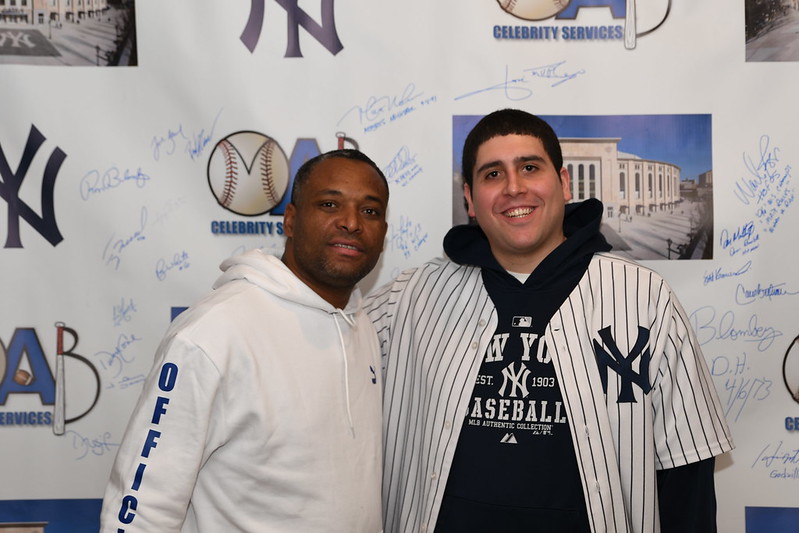 Damaso Marte was up next and he was very nice. Marte was part of the Yankees 2009 World Series team and came up big as the go-to lefty out of their pen during the playoffs. He and Joba also had a nice moment where they caught up. 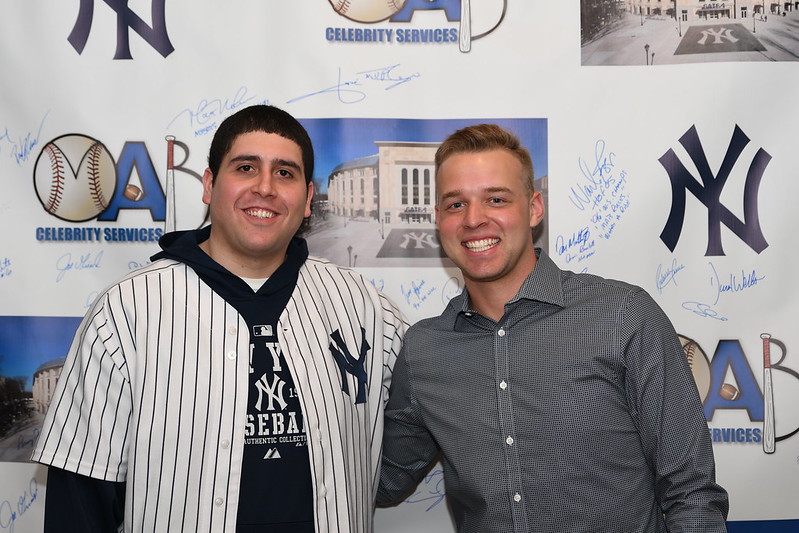 And, finally, 1:30 rolls around and it’s time for my photo op with Michael King. King has yet to make his MLB debut but that’ll change in 2019 as he’s likely one of the first arms that the Yankees will call up this season. He was very nice and commented that I made him feel short (he’s a tall dude!). Nice guy.

And that was that for Saturday. Some observations:
---
Sunday

MAB posted on their Facebook page that Charlie Hayes had cancelled. I had pre-ordered a Hayes photo op but was planning on trading it in for a photo op with someone else. 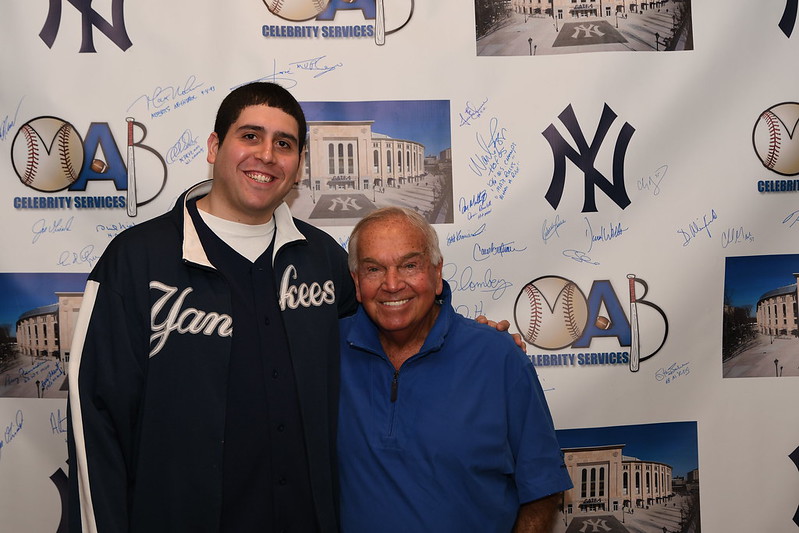 We arrived just after 10:30 AM and killed a little time before my 11:00 AM photo op with Bobby Richardson. A little before hand, Richardson was doing a Q&A though I couldn’t really hear him. Richardson was incredibly nice and commented during our photo op, “Big Anthony and Little Bobby.” He also asked me if anyone called me Tony and I told him he could (I hate being called Tony).

I saw Sparky Lyle’s Q&A session and he seems like a fun dude. 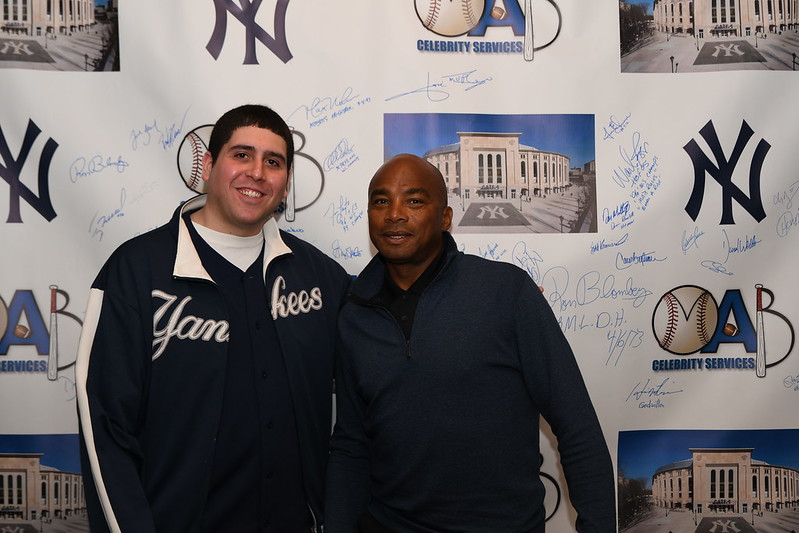 I had to kill an hour before it was time for Orlando Hernandez photo op. El Duque was one of my favorite pitchers growing up - who didn’t love his funky pitching delivery?!? - and he was very nice. 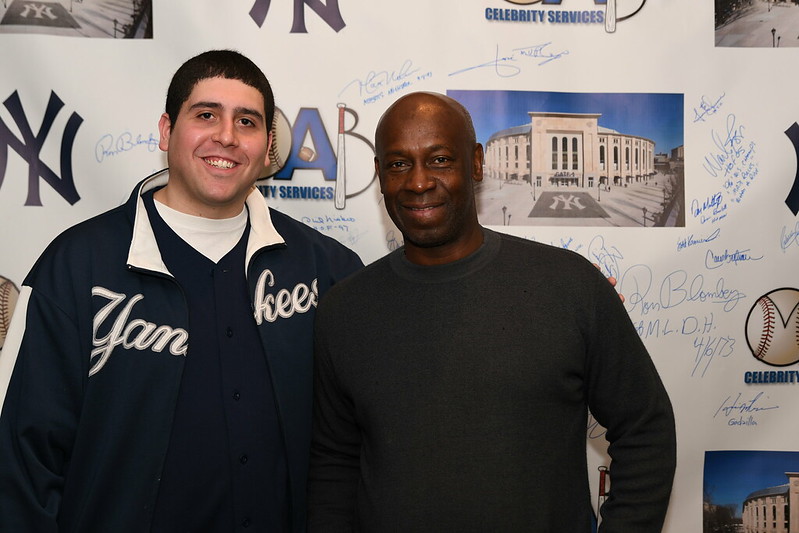 Immediately after him was Chilli Davis and he was polite but quiet.

The grind came as I had to kill time until 1:30 PM. I did meet Lee Smith but I simply shook his hand and congratulated him on his Hall of Fame induction. I also saw Harold Baines but he looked a little standoffish. 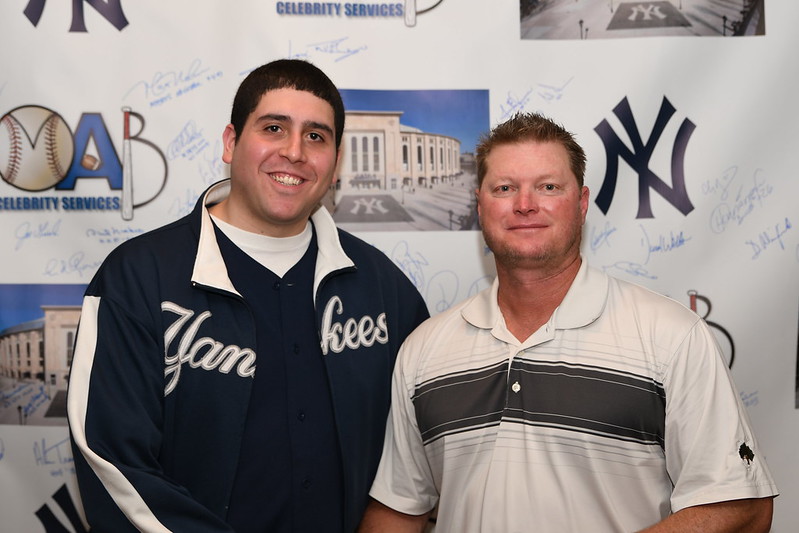 Up next was Shane Spencer - the Home Run Dispenser! - who took the Bronx by storm in 1998 with an unreal stretch where he seemingly hit a dinger every other AB. Spencer was quiet but nice. 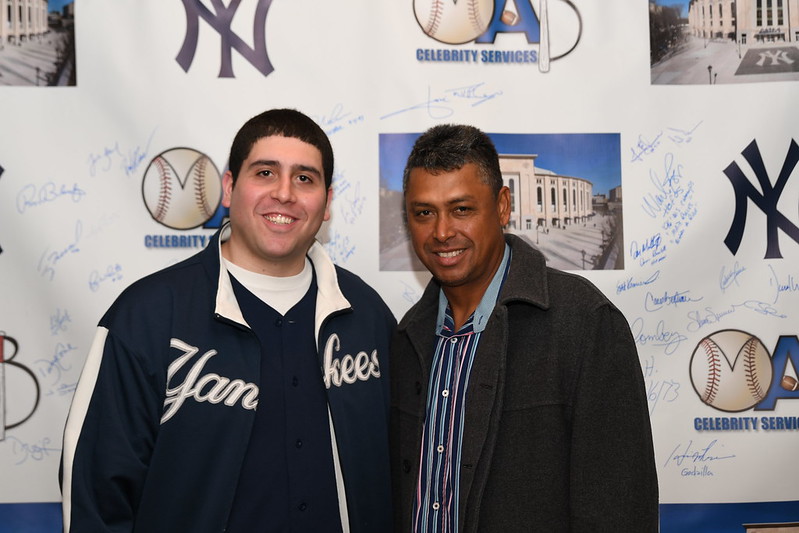 Fast-forward to 1:30 PM and it was time to get my last 3 names. Up first was Ramiro Mendoza, a former cog in the Yankees bullpen. I passed on him a couple of years ago, so I decided to get it done now. Nice guy. 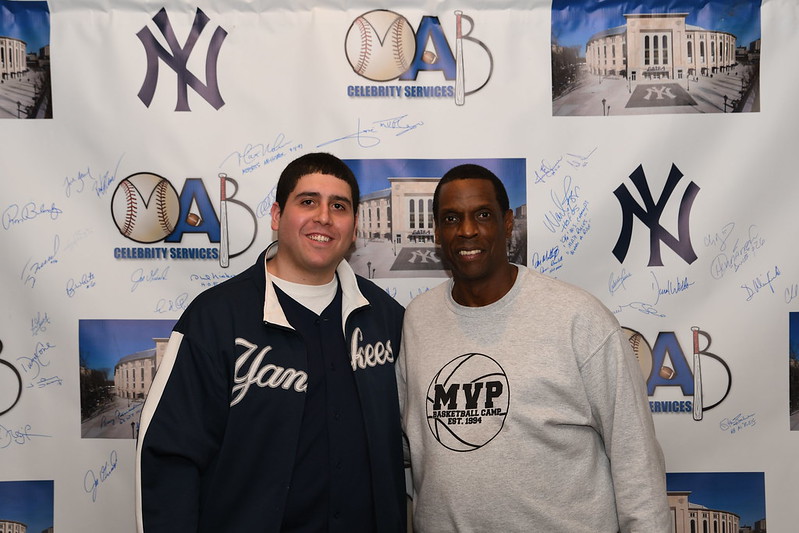 Next was Doc Gooden, a name I’ve always passed on (including the last Big Event). I exchanged my Hayes ticket for his. Nice guy who brought his entire family. 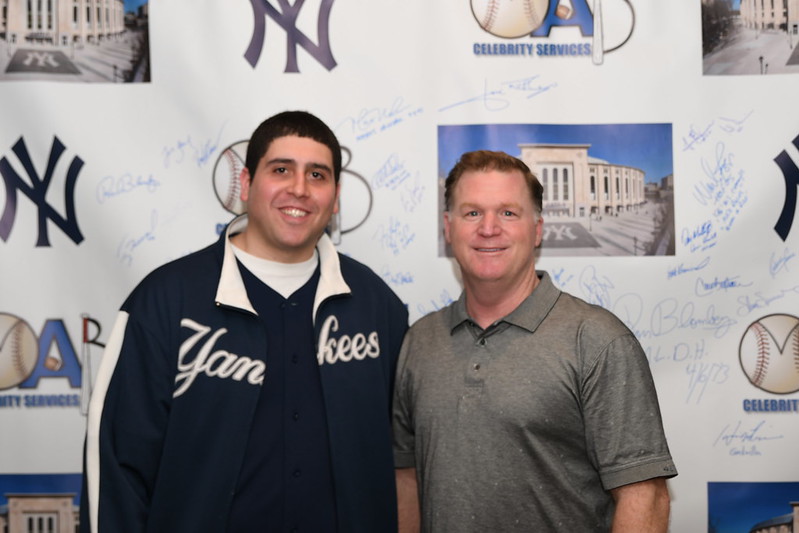 And, finally, Mike Stanton, another cog in the Yankees bullpen during their last dynasty. He was VERY nice and personable with everyone. Shot came out a little blurry which is incredibly annoying.

And that was that.

Finally some pro ops from them where the lighting was GOOD. Mattingly was doing them, but I think towards the end they were barking at people. From what I heard, he and several other players were mooched Saturday for sure in front of the place. When I left, I saw the gaggle of them, and these guys were older than me!
The Paunch Stevenson Show pop culture podcast : http://www.paunchstevenson.com
Top

You seem like a die hard Yankees fan. How long have you been a fan of their's?
Top

Greg2600 wrote: ↑
February 4th, 2019, 12:19 pm
Finally some pro ops from them where the lighting was GOOD. Mattingly was doing them, but I think towards the end they were barking at people. From what I heard, he and several other players were mooched Saturday for sure in front of the place. When I left, I saw the gaggle of them, and these guys were older than me!

I was born in the Bronx in 1991 and lived there until 2000 or very early 2001, so the Yankees were a very big part of my life growing up. I don't recall the 1996 World Series but I certainly have fond memories of the 98-00 teams. The 2000 team was by far the worst but the Subway Series was incredibly exciting for 9 year old me. I just remember the atmosphere of the Bronx being particularly festive.

Thanks, bro! Hope to see you there next January

I pre-order throughout the weeks leading to the convention.
Feel free to visit my blog concerning wrestling conventions, signings, and meet & greets!
https://squaredcirclecons.com/
Top

Great photos! Chili is one of the hardest photo withs I have ever seen. I’ve that man 1 on 1 on so many counts and never gotten the photo!
Top

Thanks! Funny story that I neglected to include in my report: Chili had to wait for someone else to finish their photo ops (I think El Duque) and a fan -- the one with the flannel shirts who always takes photos of the players -- was talking his ear off and you could tell that Chili hated every second of it lol. I didn't get the vibe that he's very fan friendly lol although he was perfectly polite to everyone.
Feel free to visit my blog concerning wrestling conventions, signings, and meet & greets!
https://squaredcirclecons.com/
Top

Sorry to bump this old report to the top, but I hope to go to this event next year and found this post very helpful. ICW, how does the pace of this compare to the LOTR superticket room? Similar or more rushed? Thanks!
Top

Travis wrote: ↑
July 18th, 2019, 8:06 pm
Sorry to bump this old report to the top, but I hope to go to this event next year and found this post very helpful. ICW, how does the pace of this compare to the LOTR superticket room? Similar or more rushed? Thanks!

I stick to photo ops, so I just camp out in the hallway outside of the photo op room and wait for whomever I have tickets to meet. The process is fast and photos usually print at a decent pace.

Autographs are done via numbered ticket system. They have an MC (who usually pronounces the names of the players incorrectly call out who's signing and what ticket numbers they're currently taking.
Feel free to visit my blog concerning wrestling conventions, signings, and meet & greets!
https://squaredcirclecons.com/
Top
Post Reply
10 posts • Page 1 of 1