Here we go again. To all of you who wish and hope the vaults of Warner Bros. could reopen to allow more of the classic cartoon treasures to emerge – Now is your time. Here’s what you can do to help (Take Two).

Last year I used whatever super powers I had to make a set of black and white Porky Pig cartoons available in an effort to convince to the studio there was an audience out there for such compilations. After several bumps in the road the set eventually broke even. But “brake even” isn’t good enough for a mega corporation. Long story short – we have one more shot. One. This is it. Perhaps a set of color cartoons, films the collectors do not have, or never had on home video (no VHS, no previous DVD or cable broadcast). A small set – 14 cartoons perhaps.

Here it is – a continuation of the Paramount Popeye cartoons. The next 14. No frills, no bonus materials, no audio commentaries. Transferred from the original Technicolor negatives. Jim Tyer animation. Politically incorrect shorts, uncut. The set will be available, separately, on both DVD and blu-ray.

The website to pre-order is now up: Order the $21.99 blu ray here – and/or the 19.99 DVD here. I highly recommend this set – I think you will be pleased. The frame grabs below were snapped off my living room flat screen by my iPhone, off the blu-ray. If this looks good to you – I ask that you pre-order, or order it in December. Let’s prove to Warner Bros. that we want further volumes of Popeye 1940s and 1950s – and we want more Warner and MGM cartoons restored and released. It’s seriously up to you.

I'm going to buy this because I want to see vol 2,3,&4 so we have more of these in fully uncut in best quality possible!

There have been DVD releases of black and white Popeye shorts.

Vol 2 and 3 are out of print. Since they go for

I got them via "alternate" means. Of course the DVD starts with this so called "warning" messange 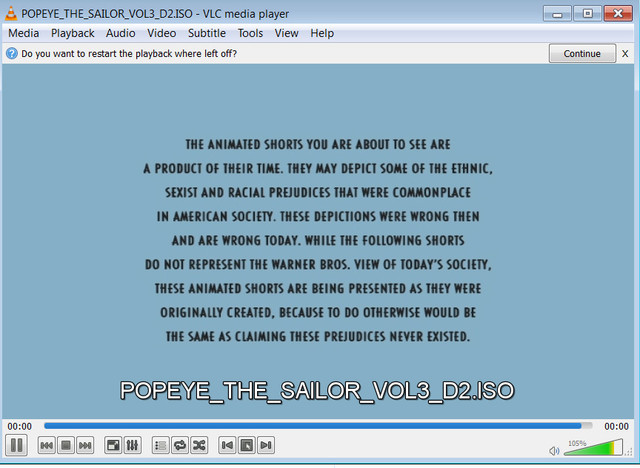 To me that reads "you are about to enjoy cartoons made before political correctness ravaged and destroyed America"
Follow me on twitter https://twitter.com/celebmeets
Top


As part of Warner Bros. decades-long corporate film preservation program, the restoration process on these Popeye cartoons has been meticulous in its mission to address any and all film damage while preserving the original animated frame. Dirt, debris and any film damage has been repaired from the original sources, most of which have not been touched in over 70 years. Warner Archive Collection has ensured great care was taken to keep the animation authentic to its original look as first presented on movie theater screens in the 1940s. The entire Popeye library is currently undergoing this process.

Comparison between the TV broadcast and the blu!

Here come 15 previously unreleased adventures featuring our favorite two-fisted fighter that are literally out of this world! The secret to the seaman's success is "location, location, location," and with this new collection, you'll travel with Popeye and crew into outer space, all around the globe and under the sea!

Continuing the chronological theatrical releases, this set covers the years 1946 and 1947. Popeye not only rockets to Mars, he explores the ocean deep, becomes a cowboy out West, fights pirates on the high seas and tackles wild game in Africa. He and his lady love, Olive Oyl, also find romance (and usually a Bluto-like rival) while traveling back to medieval times or exploring the fictional Middle Easter city of Badgag, as well as climbing mountain peaks in the frozen Klondike.

This is classic animation at its finest - featuring zany cartoon action from the pen of veteran Jim Tyer and powerfully dynamic direction from animation legend Bill Tytla. Packed with a punch, loaded with laughs and heaping with heart, The 1940s, Volume 2 comes to port with plenty of Popeye appeal.

Collection includes:
House Tricks?
Service with a Guile
Klondike Casanova
Peep in the Deep
Rocket to Mars
Rodeo Romeo
The Fistic Mystic
The Island Fling
Abusement Park
I'll Be Skiing Ya
Popeye and the Pirates
The Royal-Four Flusher
Wotta Knight
Safari So Good
All's Fair at the Fair

Prepare for 17 newly presented adventures featuring our favorite spinach-eating sailor man and his lovely leading lady, Olive Oyl. This set finishes out Popeye’s second decade of screen stardom with cartoons originally released to movie theaters in 1948 and 1949. Providing more globe-trotting and time-traveling adventures, the cartoons have been restored to look their lavish best utilizing the techniques of three classic color systems.

The Polacolor process was a short-lived 3-strip technique designed to be an alternative to Technicolor®. The studio gave it a try on a group of cartoons produced during this period, and the results are particularly striking – with fresh restorations that now show their proper, vibrant hues.

In these cartoons, Popeye and Olive travel back to prehistoric times, ancient Greece and the Sherwood Forest. They visit Plymouth Rock and the Old West, then battle assorted baddies in the Egyptian desert, the freezing Arctic and the Ozarks. Of course, Bluto is back as Popeye’s number-one nemesis, tackling the sailor man as a rival lumberjack, a fanatic flying ace and a lecherous vaudeville hypnotist.
But that’s not all. Popeye also has his fists full with a pair of pet dogs, irritating houseflies and a quartet of spinach-hating, sound-alike nephews. He ultimately meets his match when Olive decides to throw her hat in the ring and makes a run for U.S. president!

Hilarious sight gags, gorgeous cartoon art and more action-packed goodness from the golden age of animation: Popeye the Sailor: The 1940s, Volume 3 will leave you rooting – and toot-tooting – for more!