With more people at home, there has been a flood of interest in purchasing autographs. All over Facebook new ways and places to buy and sell autographs have popped up. Many of the prices are nuts, auctions have insane bidding wars where people end up paying 2x the item's actual worth. In seeing this unfold I realized since this is a major sellers market, now was a good time to sell a lot of my own autographs. In doing so, I discovered pieces I owned that I actually really liked and wanted to keep, and also discovered items out there that I actually really wanted.

I sold a lot of stuff and made pretty good money. The money I made selling my own stuff I largely reinvested into purchasing pieces I actually liked, and there are some deals to be had if you're patient and know where to look.

Here are some of the highlights grabs I've had. Post some stuff you recently added to your collection!

These first two pieces are 18x24 Schamberger signed by Austin and Michaels. I got these with a great promo code and ended up spending like $45 on Michaels and I think $70 on Austin. 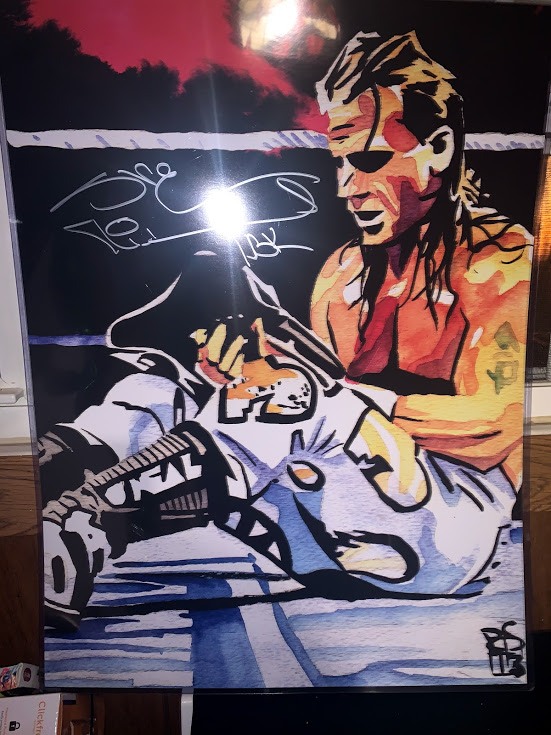 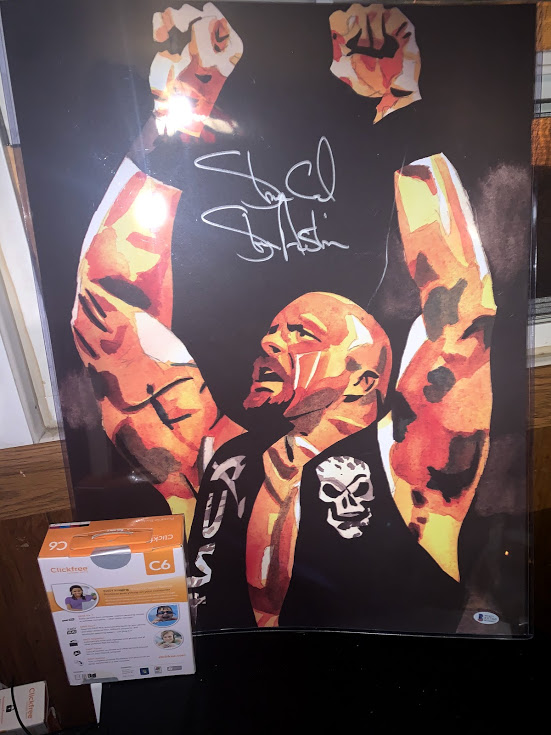 This next piece is an incapsulated and authenticated signed Undertaker comic book. I got a great deal on this, grabbing it at $78. After this, the listings gained a ton of traction and they started selling closer to $200 where you'd expect. I was glad I got it when I did. 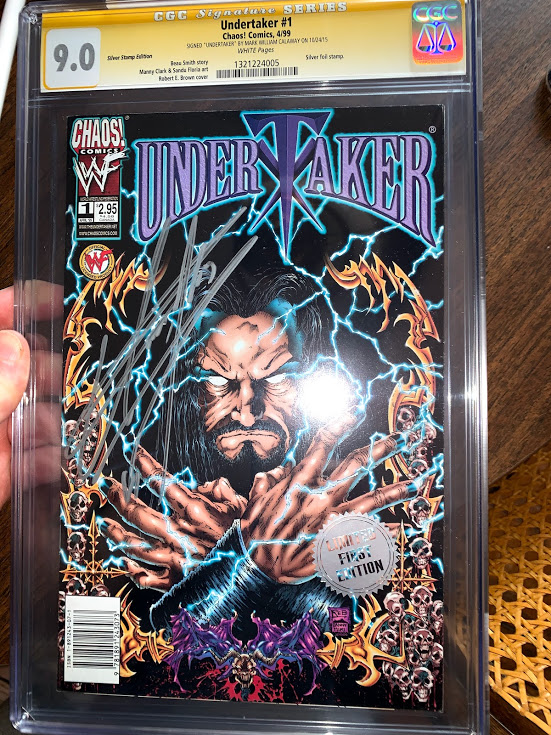 This was one of the pieces I saw on the auctions, loved it, and then found it for less elsewhere. I ended up paying like $120 for this 16x20 with the Beckett witnessed cert, while they were going north of $300 in the Facebook auctions. I had an nWo project started from a decade ago, but I will sell it now, since getting this was cheaper than mailing my original 16x20 down to Florida to get Hogan on it. 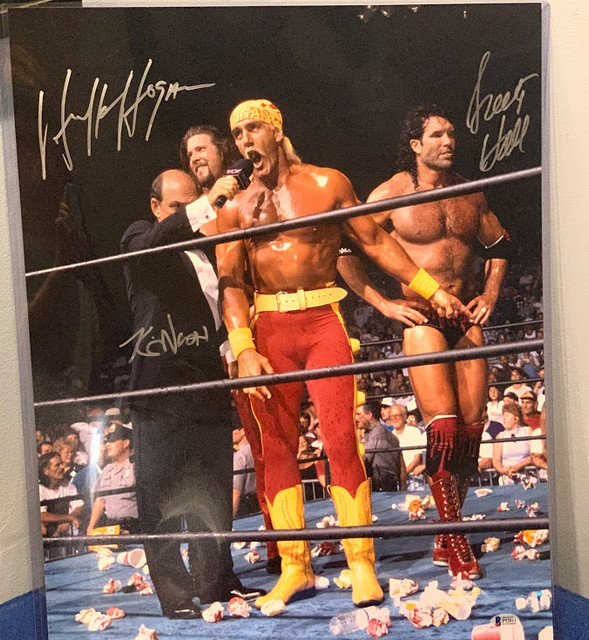 Grabbed this cheap from a vendor I trust. Only had Paul sign my encyclopedia and I wanted something stand alone. 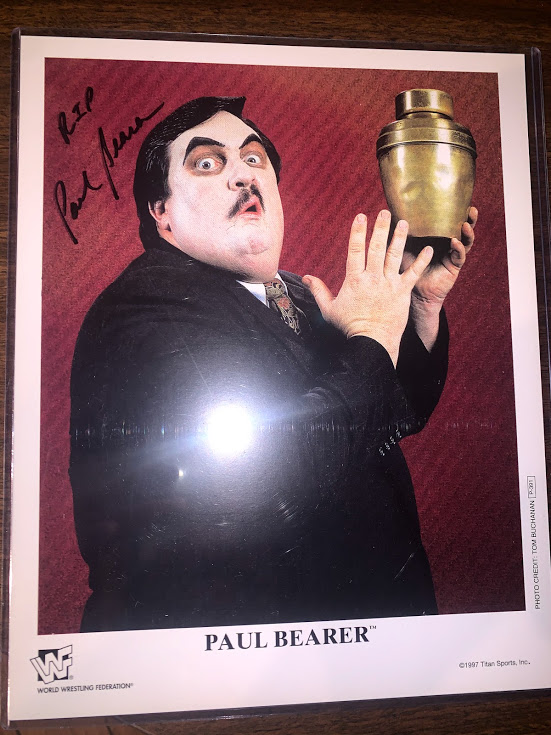 On the next two I found a seller clearly selling his entire collection. The issue was he made them all 7 day listings with super low opening bids, and I knew these weren't the kind of items to draw a ton of interest. I nabbed the HBK 16x20 for like $30 and the Hardys 18x24 for $26. Both retailed at $70 & $80. 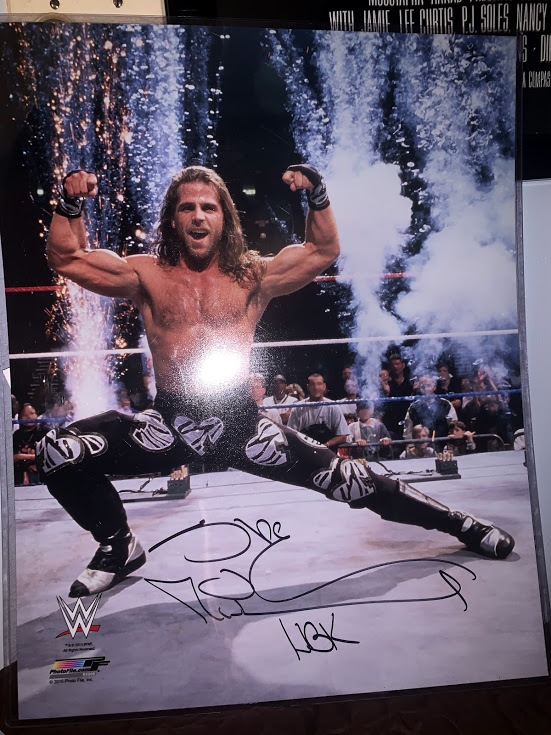 Next one was a WWE shop holiday sale pickup. Got the 8x10 signed by all of UE for like $39. 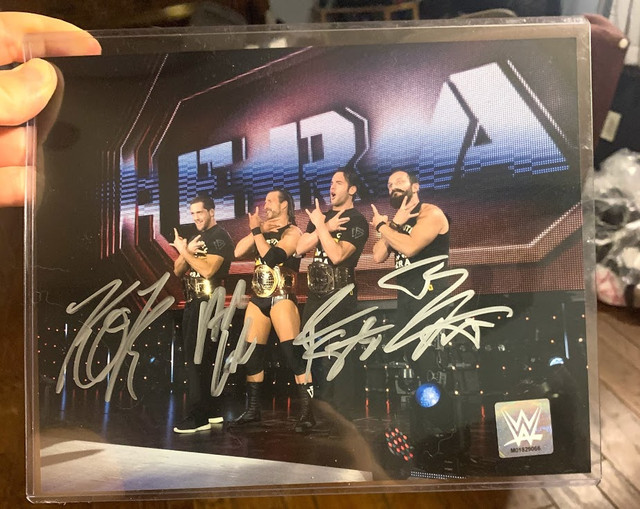 This is another 18x24 Schamberger. I had my eye on this for a while, but found someone trying to unload it. I offered them a low price and they took it since I told them I could just buy from the source. 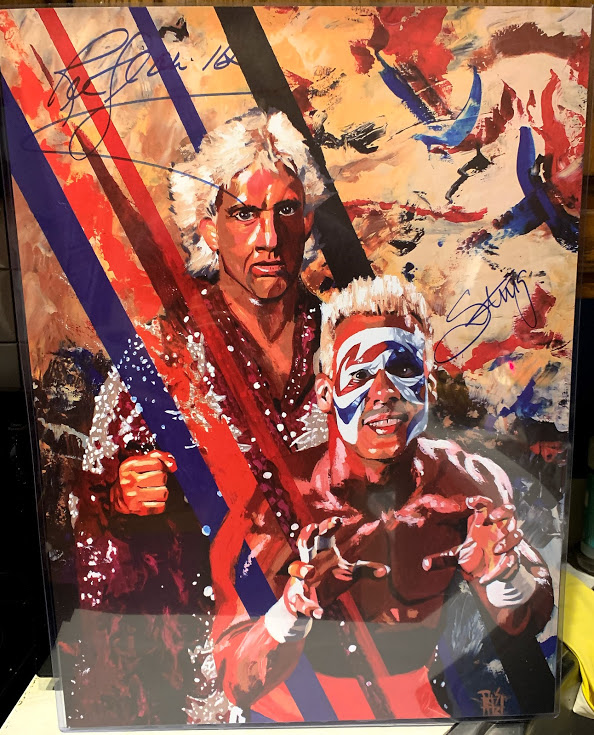 These next two were purchases from the Hogan Beach Shop. I flipped a Hogan/Bundy 16x20 I never liked, and added these. 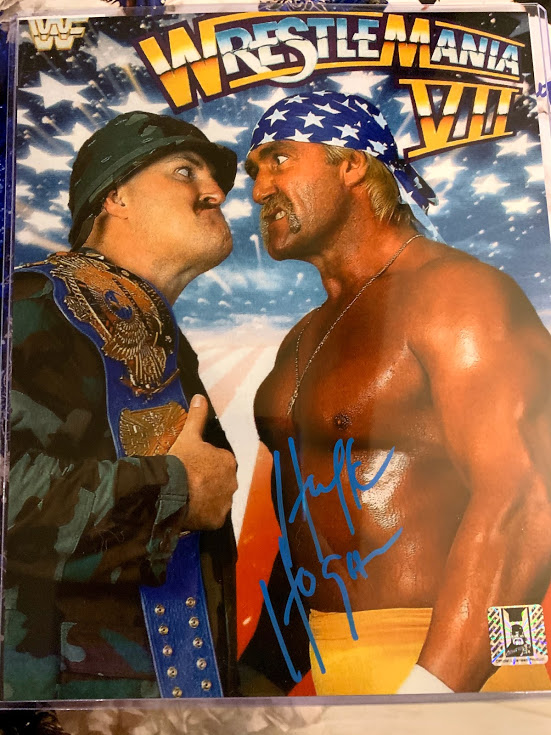 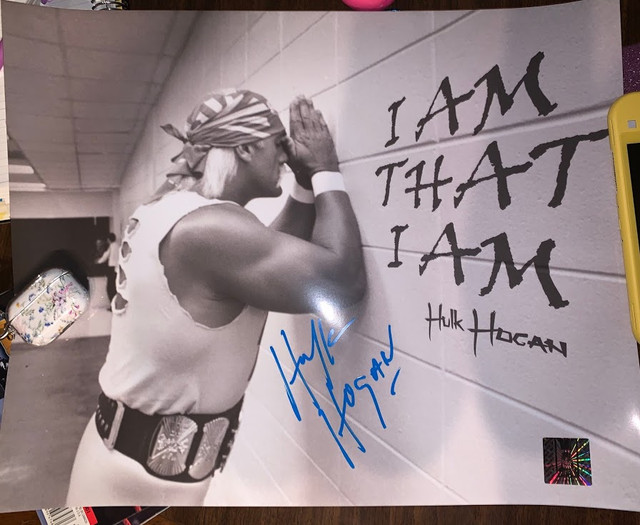 Lastly, I grabbed a few Dusty pieces. Dusty is a guy who had a huge value spike after his death, and I only got him in the encyclopedia, so I wanted some standalone stuff. The first was a great deal because it wasn't certed and the listing made it sound damaged, but the damage is non existent and the graph is beautiful. The second went under market, because again it was from the seller looking to unload his collection on 7 day listings. He also charged a high shipping cost because it came with a nice matted frame. I actually needed the frame though, so for me it made it a better bargain. 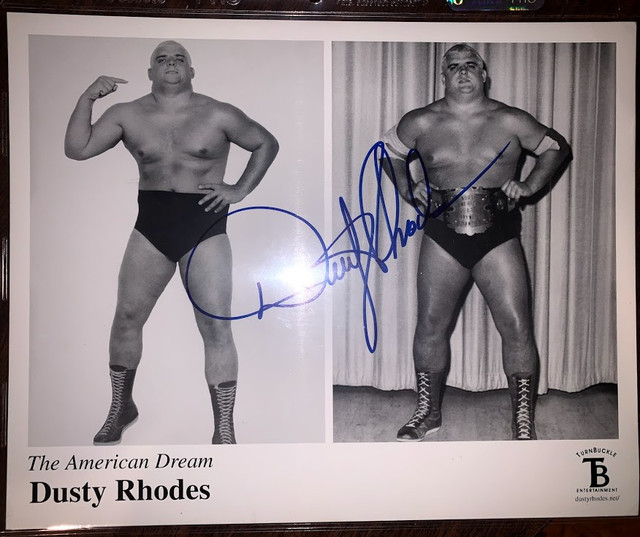 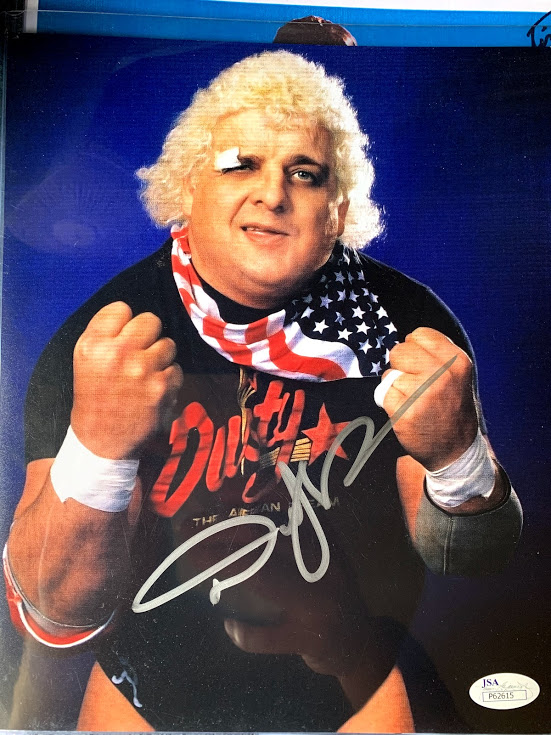 Great stuff! I saw that NWO stuff going for $300 in the same place you did, which I really thought was a lot, so nice deal on that
Top

couple of things i picked up over the last few weeks,

sandman photo at online signing, it say " can i get a band-aid and a beer" sandman is signing my photo with a mouth full of pizza and no napkin, so as there holding up my photo he's using his hand to clean his face, haha