Brief backstory....I attended the Steiner Sports event with Chevy Chase in 2015. At the time, for some reason, they only offered 11x17's from European, Christmas, and Vegas Vacation, not the original film. I chose Christmas as it was my favorite (beyond the original). A few years ago, when Beverly, Dana, and Anthony were scheduled for RICC, my plan was to buy a 1982 Vacation poster off Tri-star Promotions that was signed by Chase, and add the other 3. Well, Bev bailed and that was that. Now, I could have tried that again in the future at cons, but had no clue if Bev would do them again. So yes, she is announced for a couple, and Hall is at Awesome, etc. But I went with this one despite the "premium" just to have it done done. I declined to put Quaid on it as frankly, he's not a main character like he was in Christmas. Chris from Official Pix was very good at answering all my questions. I wound up selling the Christmas framed poster, as I didn't want two Vacation pieces to do, especially since Juliette and Johnny would have been street chases. 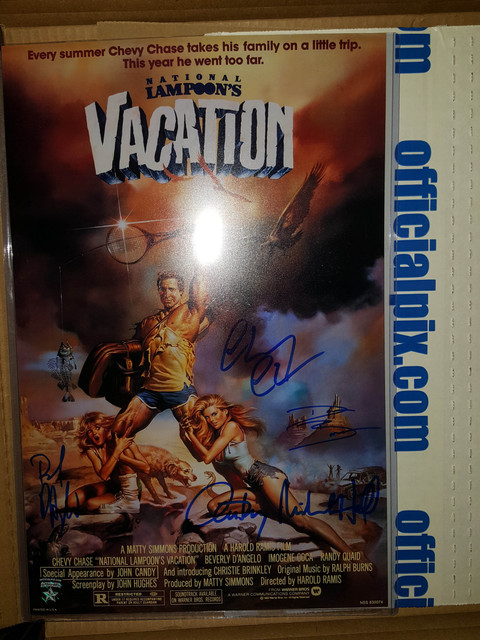 Got my National Lampoon Vacation poster from the Official Pix send-in signings back. I wasn't home to sign for the package at my place yesterday, so I had to go to the actual post office this morning to pick it up before work, which sucks, but at least they had it there, unlike some "Oh, it must still be out on the truck..." scenarios I'd had in the past.

Was happy with everything - I had already gotten Beverly and Dana at Steel City Con a while back, so I added Chevy, Anthony Michael Hall, and Randy Quaid to it. I paid for the character names, since Beverly and Dana already put their's on it, so at least everything would be consistent. Quaid had a much better signature here than in his last Official Pix siging, and most importantly he actually DID the signing, and didn't flake out because he thought the government would be there to arrest him while he was signing, lol. At this point, I'd consider the piece done, although I would add Christie Brinkley if a relatively easy opportunity presented itself, and possibly Miriam Flynn, but that would be as far as I'd go with minor characters.

I've really been happy with buying from Official Pix in the past, and this was no exception. Since the signings weren't all announced at the same time (I originally had just sent in for Chevy, then the others got added later), it could have been a real cluster-F trying to work out the logisticals of everything with a less experienced company, but the Official Pix guys had excellent communication and customer service, and everything got done without a hitch. Very happy with everything.

Sheesh Beverly gave you a much better autograph than during this signing.
The Paunch Stevenson Show pop culture podcast : http://www.paunchstevenson.com
Top
Post Reply
3 posts • Page 1 of 1